“I was the generation that burned our bras. We were free love, we were all about marijuana, Woodstock, whatever. And to think that we would age compliantly — I mean, come on!  So I think it’s the same attitude I had when I was young and breaking new ideas and shattering stereotypes.”

Wearing checkerboard sunglasses,  a constructed sweater and bold earrings, Lyn Slater looks like a fashion superhero on a mission to smash age stereotypes.

People look at her as we find a table in the atrium at Lincoln Center in NYC — hardly the most dowdy spot in town.

Do they recognize her from somewhere?

A professor in the social work department at Fordham University, in 2014 Slater started a style blog, the Accidental Icon, as a way to experiment with a more public self. She had no end game. But a year and a half later, her blog and Instagram account have over 23 thousand followers, her students are asking her to post PowerPoints online — not of her lesson plans, but of where she shops — and the 62-year-old is being featured in fashion campaigns by big brands like Uniqlo, whose Fall-Winter LifeWear Magazine has a whole section devoted to her.

In LifeWear, Slater talks about style as rebellion, a mode that took hold after she became a grandmother and realized that people had certain expectations about how she should dress in this phase of her life, as well as what a college professor should wear. Most of her readers are young, as are her students, and she shows them that you can still be a rebel — an elegant one — past 60. 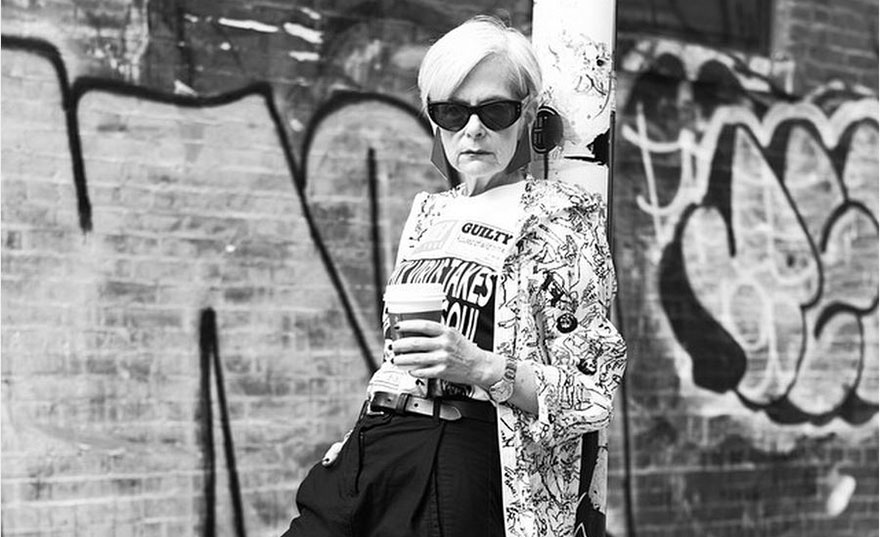 We asked Lyn about her blog, her style, aging and how Instagram has changed her life.

You once described Accidental Icon as kind of like a performance. Can you tell us a little more about that?

I think that I have always had that relationship with my clothing. It started when I was a little girl and I would dress as I imagined characters in the books I was reading dressed. I used to get these big gauze curtains and pin them on my bathing suit. So I realized that clothing can be very powerful in terms of a story you might want to tell to the world about who you are.

How has your style changed over the years?

That’s an interesting question. I think I am a pragmatist-philosopher, so I believe we are constantly changing, because we are in a transaction with our environment. So I would say that I had multiple identities throughout my life, and each of those has a particular type of costume. I think it’s not my style that changes, but the creative impulse I am having at that time, and which ideas are engaging me. 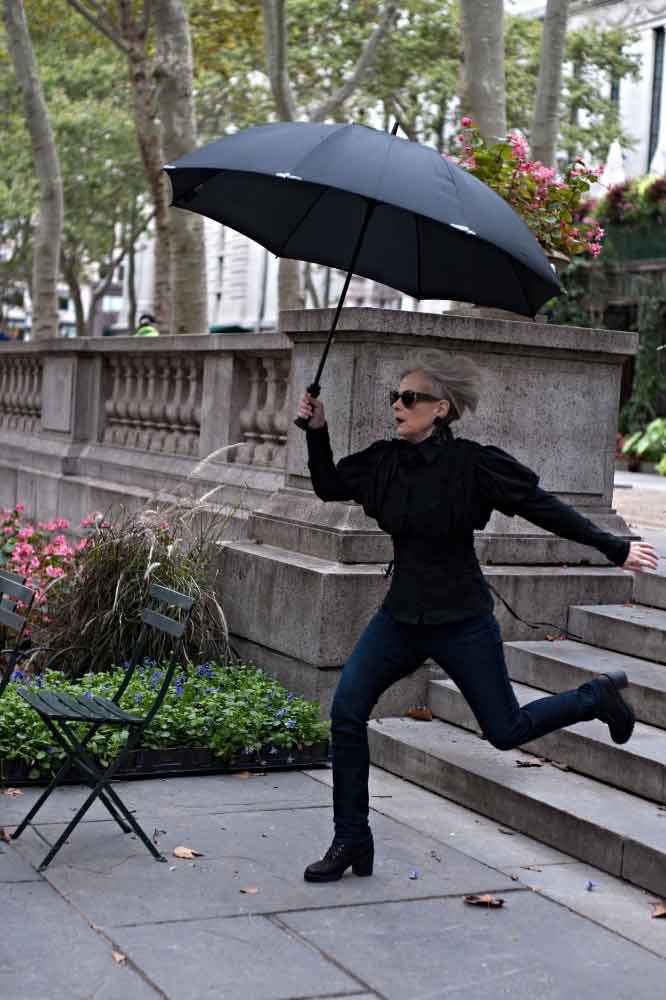 You’ve talked about using clothes and appearance as a way to counteract some of the invisibility that comes with age. Can you tell us a bit more?

If you notice on my blog I never talk about aging. I guess this goes back to performing. I am performing aging. I don’t need to say it. People know what I think feel about aging by looking at me. A lot of young people email me and say. ‘You know we were really afraid about getting older, but you are making us feel you can be a little rebellious and a bit cool. You don’t have to loose these parts of yourself when you get older.’

I was always stylish. But as I was building my career and raising my daughter, it was not something that was in the forefront. As I got older, I noticed that you do start to become invisible. Because I had the resources at the time, I started to really take some risks with what I was wearing — and I would get a lot of great feedback. Then I would do it a little bit more. So to me, the biggest irony of my life is that here I am being older, and I am the most visible I have ever been in my entire life.

Do you have a favorite fan encounter?

I really love it when I get a comment from a follower on my blog who says, ‘You gave me the courage to try X, and it was marvelous.’ That is really what I want to do. And I think my other favorite is when people say, ‘You gave me a new way of thinking. ‘To me those are the most exciting kinds of comments because they are really about making a change.

As a teacher, you work in a multigenerational space. Does that impact how you dress?

The students absolutely love it.  A lot of my clothes are recycled — I get them in consignment shops —and my students asked me if, instead of putting up my PowerPoints with my notes, to do a PowerPoint with all the stores I go to buy my clothes and post it on Blackboard.

I have always worked on one level or another with young people. And I think that has shaped me. Because I am constantly in communication with the next generation, I have been able to grow and evolve in a way that I think if I was only with my contemporaries I might not. They really challenge me. And again, I would not be so tech-savvy if it wasn’t for my students.  I want to communicate with them, and I want to be a good professor, and in order to do that with today’s students you need to speak to them in the language that they use, which is technology. Unlike other professors who ban computers or cell phones in the classroom, I try to think about ways I can use them in the moment.

How easy was it to start your blog? Do you have any advice?

I went through a yearlong period of research before I started. I wanted to be in control of the blog and the website, but I felt very intimated about learning this and that. So I investigated different platforms and I ended up using Squarespace. It’s so unbelievably simple. So I guess my advice would be do not waste six months being intimated about starting a blog because of the technology.

Our tagline is “aging with attitude.” Can you tell us what that means to you?

I am not going to lie. When I first started to age, it was very destabilizing — the physical changes and the invisibility. I had to come to grips with how I was going to do this. So after a period of it being uncomfortable I accepted it that it is inevitable and that there is nothing can stop it. Right? So I don’t do things like things like dye my hair or spend $2000 on wrinkle cream or anything like that—I just decided to embrace it and do whatever I want to do. And one of the delightful things that lets you age with attitude, at least for me, is that what other people think is not as important to me as when I was younger. I really please myself.

I was part of the generation that burned our bras. We were free love, we were all about marijuana, Woodstock, whatever. And to think that we would age compliantly! I mean, come on. So I think when you ask what aging with attitude means, it’s the same attitude I had when I was young and breaking new ideas and shattering stereotypes — that’s what aging with attitude means. Its just really is shattering stereotypes. 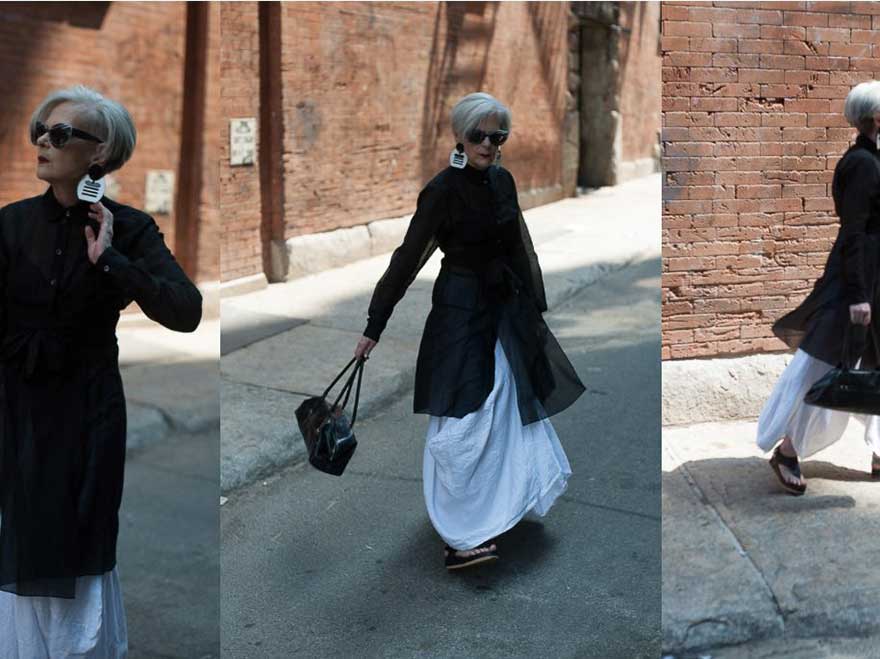