How often are you able to see your doctor same or next day when you’re sick? How many times has the interaction between your primary care doc and the specialist he referred you to been seamless? If you’re you’re shaking your head, you’re not alone.

A survey of seniors in 11 countries across the developed world found the US lagging in several critical areas – but ahead of the rest when it comes to end of life planning.

Older Americans are sicker than seniors in any other of the 11 countries surveyed. We struggle to pay for care and overuse of emergency rooms. But the report does show that special efforts to improve our system have paid off: In areas of care where the US has focused attention and resources, we’re doing much better.

The survey was conducted among more than 15,000 people 65 and older in 11 countries – most of them in Europe – by the Commonwealth Fund, which set out to learn how various health systems are helping seniors and which policy reforms might improve the situation.

One country worth paying close attention to in these results is the Netherlands, which in 2006 established a healthcare system very much like the one established by the Affordable Care Act – with differences. (Read more here.)

Here’s What We Learned 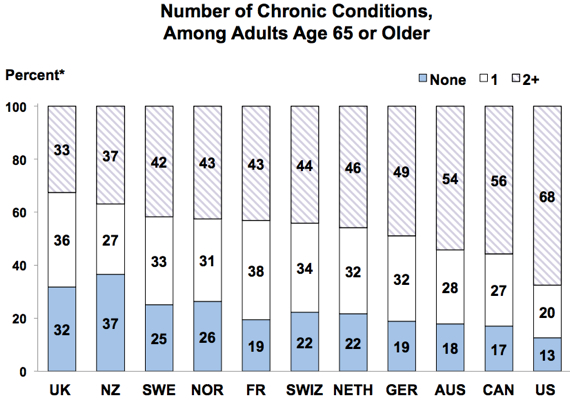 He said, she said – forget about coordination

France was the only country where seniors did not have trouble getting coordinated care, with many American seniors reporting poor communication between primary care doctors and specialists, or conflicting advice. 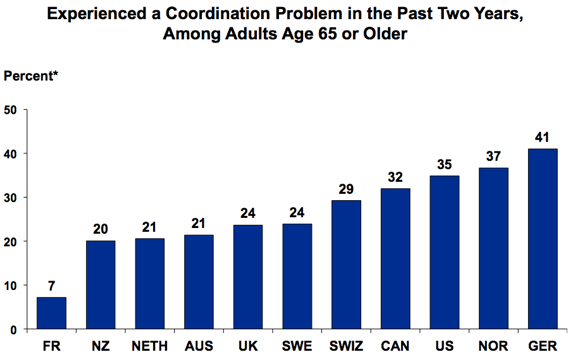 Medical care is too expensive

American seniors were the most likely to report financial difficulties paying for medical care, despite medicare coverage; 19 percent didn’t visit the doctor, skipped a test or treatment, or failed to fill a prescription because of cost. Eleven percent of older Americans had trouble paying medical bills; in Norway and Denmark, that number was only 1 percent. The Dutch government limits out of pocket expenses to the equivalent of $250 a year. 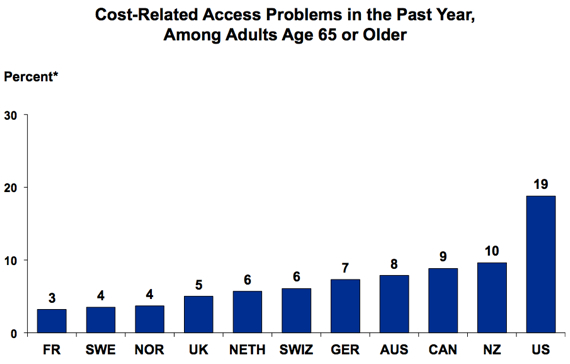 We have to get very sick to get good care

In the US, the sickest 10 percent account for 65 percent of all healthcare expenses.

It’s hard to get care when you need it most

Americans, along with seniors in Canada, Sweden and Norway, could seldom get a timely doctor’s appointment when they were sick – only 57 percent in the U.S. were able to – and many have used the ER for urgent care. In France and New Zealand, 83 percent of seniors say they can see their doctor when they need to. And in the Netherlands, 77 percent of seniors said it was easy to get after-hours care without going to the ER. According to a 2011 blog post by the Commonwealth Fund, the Dutch created a web of urgent care centers staffed by physicians and nurse practitioners, who provide telephone consultations as well as walk-in care after hours. Most of the centers have drivers, so that physicians can make house calls to patients who can’t travel. 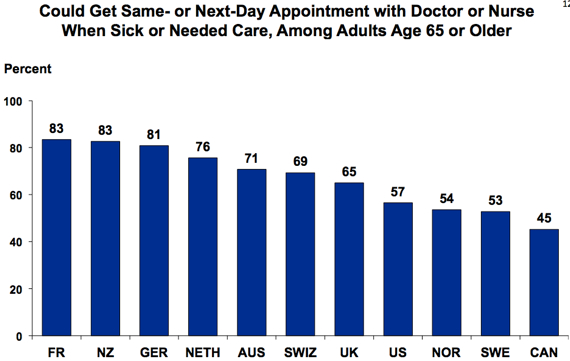 Good news! We don’t have to wait to see a specialist (if we can pay)

The US comes out ahead in specialist availability. A big 87 percent of people reported never having to wait more than four weeks to see one, whereas that number was only 46 percent in Norway (where only 1 percent of respondents had trouble paying medical bills).

A full 76 percent of older Americans said their doctor had talked to them about diet or exercise, compared with only 41 percent of Dutch elders – even though 94 percent of seniors in the Netherlands reported that their doctors usually spent enough time with them (compared with 86 percent in the States).

The US has worked on improving the management of chronic disease, and it’s paid off. Our doctors give us goals, along with symptoms to watch out for (58 percent said yes – could be better!), and a plan for daily living we can carry out at home (83 percent). Those numbers are much lower in Sweden (23 and 41 percent), where 75 percent of seniors have one or more chronic condition.

And we’re learning about the dangers of mixing meds

When it comes to end of life, the US is planning

Among older Americans, 78 percent had discussed their preferences with a family member or doctor, in the event that they couldn’t make decisions for themselves, and 55 percent had a written plan. In France, those numbers were just 12 and 5 percent.

How does your experience compare? And what do you think can we do to improve our system? Be heard!