You’ve probably noticed a lot of young people have a thing for “vinyl” – what we used to call albums, records, LPs…

Maybe you’ve also taken note of the knitting needles and yarn sticking out of oversize purses on the subway – perhaps even needles in action. Do you knit on the subway? 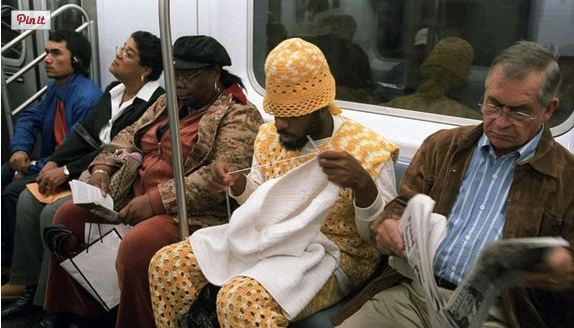 And what about purported “grandpa swag” – suspenders, baggy pants, cardigans and even some versions of Normcore. According to one Millennial we know, grandparents are the coolest because they’re don’t even have to work at Normcore. (Click here to learn more about Normcore.)

“Old person” style and lifestyle have been hip for a while. Back in 2013, Senior Planet pointed to this: And a Google search brings up a myriad Pinterest boards and Tumblrs devoted to the idea of “hipster grandma.”

Last month the New Yorker published a tongue-in-cheek report about a supposed grandparent revolt against the Millennial appropriation of “grandma” and “grandpa.” The piece, by Cathy Lew, pointed out that Millennials are using the word “grandma” when they really mean something along the lines of “couch potato” or “I just want to stay home Saturday night and do craft projects,” and “grandpa” as the descriptor for a certain type of boring sweater or outfit fetishized by a subgroup we’ll refer to as hipsters.

In “Grandmas Rise Up Against Millennials’ ‘Grandma’ Lifestyle,” Lew quotes “real” grandmas who say the appropriation has nothing to do with real grandma lifestyles and everything to do with a stereotypical retrograde notion of crazy cat grannies, boring stay-at-home grannies and/or craft-obsessed grannies.

The 21st-century grandma is none of the above, Lew’s grannies say. “When my lover Hal left me for my canasta partner, I got myself a new canasta partner. I sure as heck didn’t stay inside and drink three bottles of Pinot Grigio by myself!”

And in the opinion of one Bertha McGee, the media’s to blame because of the lack of diversity in its representation of seniors. You’re either a Golden Girl or a cat lady.

Maybe she saw Buzzfeed’s recent “22 Signs Taylor Swift Is Actually 82,” which included references to Swift’s love for cats and holidays, her relationship advice and her craftiness.

It seems Swift has given young people permission to be, like: “It’d be hashtag embarrassing if I told my friends I’d rather be baking a Bundt cake than getting blackout. But if I say it’s because I’m like a ‘grandma’ people automatically get it. There’s a cool factor.”

Whoever is to blame, Lew sees no end in sight:

“Apps such as Seamless and Netflix continue to empower young people to spend an entire weekend on couches molded to the exact contours of their bodies. Cancelling plans that require putting on pants is just a ‘Sorry, I’m being a grandma tonight’ text away. Put simply, this phenomenon shows no signs of slowing down.”

For more, see “Grandmas Rise Up Against Millennials’ ‘Grandma’ Lifestyle” in the New Yorker.

What do you think? Are you offended by the “grandma” trend or is it cool to be admired for who you really aren’t?

3 responses to “Grandmas Vs. Wannabes”

Open Thread Final Update: That Was the Year That Was….

Finally we close out the books on the dumpster fire that was 2020. Read some parting shots.
Sex & Relationships

A recent widower needs advice on when and how to seek a new love.
Book Club

Get Your Finances in Order in 2021

Are your finances on the right track for 2021? Get answers here!