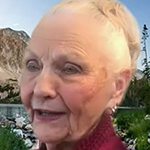 As a widow living alone for over a decade, suddenly St. John (at left) was going to be very much alone: The “curtain” was Wyoming’s Covid lockdown order.

Then…a surprise. An email arrived describing a daily virtual meeting, Monday through Friday. If she wanted to be a participant, St. John was advised to download Zoom.

Zoom? What was that?  And Senior Planet? She’d never heard of it. Most of all, St. John had no idea why anyone had bothered to send her that virtual meeting announcement email.

Even so, she clicked on the link and followed the instructions. “It was one of the best things I’ve ever done!” says St. John.

At the time, the lockdowns were expected to last a few weeks. The weeks stretched into months, then stretched to over a year.  “Other than food delivery people, I saw no one,” reports St. John.

Well, “no one” — in person. Even though she lives in Laramie, Wyoming, every day there was a lively lunchtime conversation with the men and women who signed in to Senior Planet’s virtual meeting Lunch and Learn. Learn the backstory here.

“Senior Planet was the silver lining in my life during this time,” says St. John. Proof? She had a perfect Monday through Friday attendance record for over a year.  A few even gathered over Thanksgiving and Christmas over volunteer member Dave Taenzer’s Zoom.

From Virtual to Real

A close nucleus developed. A group of participants decided that it was time to move from the URL – (the virtual) – to the IRL (In Real Life). 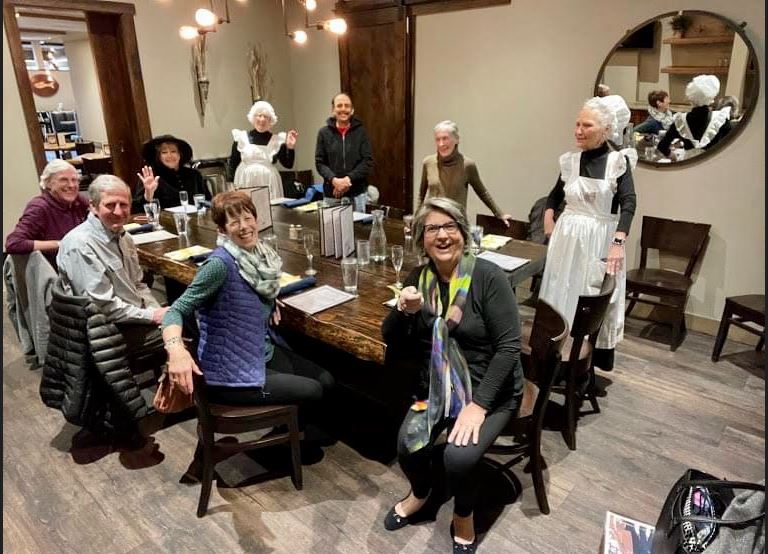 In April, 2021 two carloads of Colorado friends seen only on screens during Zoom sessions made the 130 mile trip to Laramie. St. John, who was waiting for them, had planned the day’s itinerary.  It began with a tour of the landmark Ivinson Mansion (https://tinyurl.com/43nuu5yz), followed by a leisurely luncheon, and capped with a specially hosted farewell tea party in a friend’s lovely home.

Round Two Reunion – and more

The group returned to Colorado that evening with – what else? – plans for a follow-up reunion in 2022.

Many restrictions were gone when St. John planned the second April gathering’s itinerary. By then she was involved in community theater so, of course, the Denver contingent enjoyed a matinee performance.

What are friendships like when people first meet each other as small squares on electronic screens?

Plans are brewing for a third day trip in the spring of 2023 – which prompts a question: What are friendships like when people first meet each other as small squares on electronic screens?

St. John says “they’re like the friendships we’ve always known. As happens in real life, after meeting, some connect more deeply and remain in touch off-screen as well as virtually.”

Know someone who needs help getting and paying for a device and an internet connection?  Share this video with them about the Affordable Connectivity Program. 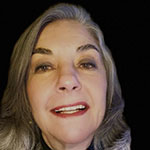 5 responses to “Get Social: From URL to IRL”