Last week in  Aging With Geekitude, Erica explored the tablet vs. computer question – which is right for you? This week, she’s giving up on affordable, practical tech for seniors and revealing her secret tech crushes.

I was afraid I’d stand out as the oldest person in attendance at the CE Week consumer electronics show earlier this summer. But as I schlepped there through Manhattan’s steamy streets, I needn’t have worried. The crowd, many of whom were also gray-haired, were much too focused on the fancy gadgetry to be aware of me.

My mission was to find practical products that work for the senior market – not necessarily designed for, but designed with older as well as younger people in mind. I was looking for products that were intuitive to use, with enlargeable fonts, chunky controls and other features that make tech easier to use for those of us post 60 – as well as realistic price tags and a fun factor.

As I browsed, I also asked the exhibitors if they had considered the over-65 consumer. They were young and polite, and they met my question with blank stares. Nobody gave me an outright “no,” but when my Senior Planet colleague told the exhibitor of the wearable “body manager” GoBe – which claims to monitor heart rate, blood pressure, calories, glucose and more – that it could help older people if the readout on the GoBe’s smartphone app weren’t so small, she was told that they had really designed it just for people 25 to 40. These people:

Many products at CEWeek NY seemed to have been made for younger people – or without a real understanding of older people’s needs. The guy who was exhibiting the cute Xcrool universal remote pitched it as perfect for seniors, because it lets you scroll through channels using a big, brightly lit wheel and a cushiony keypad that “relieves 95% of pressure from joints.” But if you want to use the keypad, you have to squint to see the numbers on the tiny buttons.

I saw a product I really liked, a spiderlike tablet holder called Tablift that fits over your reclining body and props up your tablet at eye level when you lie down so that you don’t have to hold it up to watch. I would have snatched this up, but when I tested it by lying down on the bed they had set up I was mortified to find the spidery legs didn’t make it over my midsection. I’m prepared for clothes that don’t fit, but a tablet holder? It was designed for the 20-something size 6 they have modeling the product… 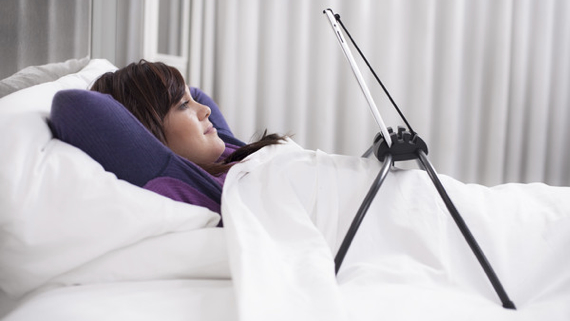 …not for the 60-something size 18. How disappointing!

There were products that worked for seniors (ed: see our reports from CEWeek), but I didn’t find much of the really practical – and affordable – stuff I was looking for.

So I decided to enjoy myself by fantasizing about the unattainable.

Like all tech addicts, I’m afflicted with the “ooh shiny” syndrome. If you have grandkids, you’ve seen it – the glazed, lustful, gotta-have-it expression that comes over them when they see the gleaming exterior of the latest very expensive gadget that mom does not want to buy for them.

In my case the “ooh shiny” syndrome is inherited. Way before electronic gadgets were invented, my mom snatched up anything called a “labor saving device.” She actually had the rotating base of a blender recessed into her kitchen counter so that all she had to do was lower the glass container onto it, turn it on and voila, food processor. I’ve never seen one of those anywhere else.

So, this week, I am belatedly giving my “Ooh Shiny” awards to gadgets I neither need nor can afford but lust for anyway. (See my CE Week Best in Show awards for useful gadgets for the older set.)

As soon as I walked onto the show floor I saw a humongous TV with a curved screen and color and 4K resolution so intense that it almost hurt my eyes. I stepped back in awe. It made my puny 42” HDTV at home look like an old black-and-white. I was afraid to ask how much this supremely shiny object cost and tried to maintain a poker face when I heard the $7000 price tag, but I think my jaw drop was a giveaway. I sat down to watch it for a while and fell in love. It sits on a motorized pole, making it easy for anyone to shift its position and angle, it’s Internet connected…. This TV will be the first thing I’ll buy when Hollywood options my book and I get rich.

Instead of a bicycle built for two this is a car built for two, one seat behind the other, in a tiny body that looks like a huge bullet with two enormous high wheels in the front and one in the back. It gets 84 miles per gallon (yes, you read that right) and sells for $6,800, which would make it affordable even for me – especially if I forgo the Bang and Olafson TV. The exhibitor said a lot of RV owners have been buying them (reserving them—they’re not actually available yet) for towing behind their RVs. Though the car looks tiny, it’s very comfortable; the only problem for older folks is getting in and out of the thing since it sits almost on the ground. But it is terminally cute and I’d love to have one sitting in my driveway as a conversation piece.

Since my favorite ooh shiny gadget is my Samsung Galaxy Note 3 smartphone, I was mesmerized by Pioneer’s App Radio, with which I would happily replace my car radio/CD player. You put its 7” touch screen on the dashboard and link it to your phone. Once I gave up books on tape or CD, I was stuck attached to my phone to listen in the car – not an ideal solution, since it cuts me off from the sound around me, and the wires get twisted in my seatbelt. This gadget, which would allow me to access books, music and phone calls via the car’s speakers, comes with all kinds of nifty apps like maps, GPS, parking space finder, traffic and weather info, and much more, and it even incorporates your regular AM/FM radio via your car’s antenna. This isn’t a cheap solution. It costs $359 on Amazon and you’ll have to get it installed at an electronics store, but it’s cheaper than a new car that has the technology built in. What I love best about this device is that there’s a version for Android as well as iPhone. 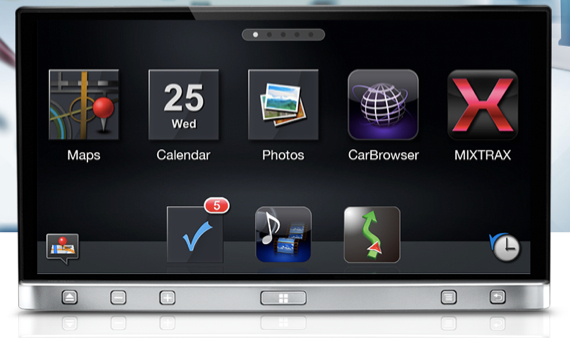 When I left the show I decided it would only be appropriate to sign up for Uber, the cell phone app that hails you a cab, since there were Uber reps in the lobby to help me. Uber was a godsend since it was rush hour, there weren’t any yellow cabs on the street and I was late for my train. After 10 minutes, a well-dressed, polite driver in a comfortable air- conditioned cab showed up to take me to Penn Station. And it was free, since the first ride on Uber is gratis. As the younger generation would say, Uber rocks!

2 responses to “Gadget Designers Aren’t Thinking Past 40: Whatcha Gonna Do?”