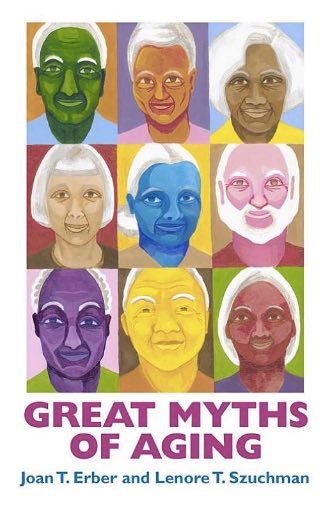 When it comes to what old people are like, everyone has an opinion, especially younger people. Perhaps because they’re afraid of aging, the young and middle-aged tend to stereotype older people as grouchy, frumpy, slow, forgetful. Yes we do change as we age, but not in stereotypical ways. What’s more, because these ideas are ingrained in the culture — in the language we use and the images we see daily — it’s easy for us to buy into them. But even if you’re mostly able to resist the mythology, it’s hard to make a case against it if you don’t have the facts.

So we talked to gerontologist Joan T. Erber, co-author with Lenore T. Szuchman of “Great Myths of Aging” — a book that mixes rigor and humor in smashing 37 myths about growing older — to find out which myths are the most common and why they’re not true.

Here are her top eight.

Before you assume that older people are suckers, consider how many affluent, supposedly well-informed young and middle-aged people fell for Bernie Madoff’s Ponzi scheme. Yes, people today in their 80s and 90s may be more trusting, having grown up in a time when trusting someone was the polite thing to do. But on the whole, older people don’t so much fall for scams more than younger people, but are targeted more often — possibly because, as the FBI reports, we’re less likely to report a fraud. We may be ashamed of being conned or afraid that relatives will think we’re losing cognitive abilities (another myth). Also, con artists know that older people are likely to have profitable nest eggs ripe for targeting. Despite all this, Erber and her co-author point out, AARP and other organizations that serve seniors are forever trying to “educate” us about how to protect ourselves. And that’s infantilizing.

2. If you live long enough you’ll wind up in a nursing home

This stereotype is so pervasive that a film like “Grumpy Old Men” doesn’t seem politically incorrect. A study of Disney characters found that 25 percent of the older characters were angry, grumpy or stern. Actually the opposite is true. According to one study, if you were agreeable to start with, you’ll only grow more so, despite any physical or health challenges you might be faced with (although chronic pain can make us grouchier). Furthermore, older people tend to focus on the sunny side of things more than younger people do. We pay more attention to positive than negative information — the opposite of many younger people. In fact, if you’re looking for grouchiness, look no further than your latest interaction with tech support.

4. Older people would rather live with kids or grandkids than alone

The assumption here is that older people are lonely and given a choice, they would move in with adult children or grandchildren. Being away from family means being incomplete. Not true! In previous generations, this was a common arrangement, but surveys show that older people today place great value on maintaining separate households, even in different cities, as long as they’re in good enough health to be independent and can afford it. Many of us would like to spend time with our network of friends while sustaining family relationships at a distance, especially now that technologies like email and Skype make it easy to stay connected. The exception is if you belong to an ethnic group with a tradition of multigenerational households.

5. Retirement is depressing, so we put it off as long as possible

In fact, even though mandatory retirement at age 65 is now illegal, men especially are retiring even earlier than they used to — if they have a good pension or sufficient savings. Many older people look forward to retirement after years of hard work. Older men who are married, and in particular those who are very happily married, are the most likely group to plan their retirement date. Many retirees wind up in “encore careers” doing something they’re passionate about to help future generations, or they volunteer. People who are forced to retire due to downsizing, poor health or other factors are the ones who aren’t so happy about it.

6. Older people are set in their ways

Studies have shown that personality is fairly stable over time, so if you were open to new experiences when you were younger, you’re likely to be open as you age. People who are stick-in-the-muds will stay that way, too. There’s considerable evidence that many older people do like to try new things —just look at the educational travel programs tailored for seniors. In 2010, nearly one hundred thousand older adults participated in Road Scholar programs and 90 percent reported that they learned something new.

Young people don’t like to think about older people having sex, maybe because they don’t want to imagine their parents or grandparents “doing it.” As a result, our culture desexualizes older adults. When young people see a couple in their 80s holding hands, they’re more likely to say “isn’t that cute” than “isn’t that romantic.” But the reality is that the desire for sex and intimacy never goes away. People who don’t have debilitating health problems can and do have sex well into their 90s. What may get in the way, especially for women, is having no partner to do it with.

It is true that certain aspects of cognitive functioning decline with age. For example, older people do less well on tests that require speed. But on tests that gauge verbal ability and knowledge, we don’t lose. And as far as knowing how to go about solving real-world dilemmas — a core piece of what we call intelligence — many of us improve with age. A recent study about aging and wisdom concluded that older people are more likely to look at things from multiple perspectives, allow for compromise and recognize that knowledge has limits. We can make up for a decline in our ability to figure things out quickly by using our increasing powers of complex reasoning about people and moral issues.

Most myths are negative and work against us, but Dr. Erber suggests that we can actually consider some of them like “senior discounts.” Walk out of a store with a hat you haven’t paid for, and you might politely be asked to put it back, according to one study — you get a pass for being “forgetful.” Younger people who did the same thing were charged with shoplifting.

So take your senior discounts where you can. Age has to have some benefits.

Which myth is at the top of your list?

Read about all 37 myths in “Great Myths of Aging”