Two Elders in my life, Eldo and Harriet, taught me about the “dignity of risk” – one aspect of resilience and independence that is often overlooked as we age. It’s far too common for well intentioned people in our lives to pressure us into a safety bubble – especially if we have functional challenges. The dignity of risk simply allows people regardless of age or functional ability to continue making choices about how we want to live; to figure out for ourselves how to balance personal risk with safety.

At age 82, Eldo fell off a haystack and broke his back and neck. His friends were devastated. They were convinced that Eldo was “done.” But when I walked into his hospital room, the first thing he said to me was, “Bleep de bleep [use your imagination] I can’t believe I ruined my whole summer of horseback riding!”

I was amazed! Didn’t he get the memo saying he was finished riding?

Next, Eldo called in the nurse to tell her that the neck brace was causing him a lot of pain. She was patronizing, “Well, you can’t expect it to be comfortable.” To which he replied, “I’m not asking for comfortable, I’m asking for tolerable. Get the orthopedist on the phone.”

As an expert on healthy aging, I knew that the building blocks of resilience include optimism, hope, self-efficacy—believing that we can have an impact on what happens to us—and a sense of control. But here was resilience in living color as Eldo took charge of his recovery. He knew he would recover, he knew what he needed and he asked for it! A different neck brace brought him immediate relief and a sense of control over his destiny.

This photo of Eldo was taken seven weeks to the day after he broke his back. 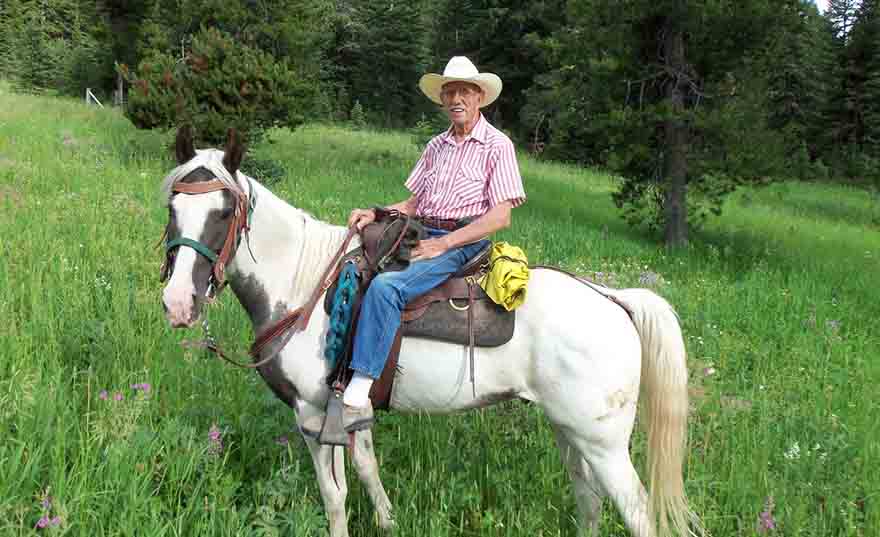 How did he recover so fast? His mindset: Not only did he expect to recover, but he also rejected all those negative expectations of aging, and by looking forward to getting right back on his horse, he embraced the dignity of risk.

Recovery is far more than just physical, and Eldo’s doctor, a horseback rider himself, realized how critical it was for Eldo to live his passion. How different the outcome could have been if his doctor, family and friends had insisted that he retreat to the safety of his recliner, and Eldo had dutifully obeyed.

When my son Cole was born I needed part-time childcare. Harriett was interested in the job, but I was a worried. She had advanced osteoporosis with spinal kyphosis—the rounded upper spine that people often call a dowager’s hump. After making a career out of advising people to focus on possibilities, not disabilities, could I live that advice? So we had a frank talk. “I’m concerned,” I told Harriett. “I don’t want you or Cole to get hurt.  How can we make this work?” With equal parts amusement and determination she said, “Oh, I’ve had a bad back my whole life and took care of my own kids. I don’t know why it would be any different now.” Harriet was 80 years old at the time.

We came up with adaptive strategies so there would be no lifting required, and Harriet watched Cole from the time he was four months old until he went to school. Like Eldo, she taught me a lot about the dignity of risk. In her 90s she used a walker and lived in a second floor apartment with no elevator. People often pressured her to move to a ground floor apartment, to which she replied, “I want to see the mountains when I wake up in the morning. I’ll scoot up on my butt if I have to!”  She lived there until she was 100 years old.

So, Harriett, frail with many physical challenges, and Eldo, out riding horses in the mountains, had two very different aging experiences. Yet they shared a common trait—the ability to use the tools of resilience to live life on their terms. And they were both afforded—no, demanded—the dignity of risk.

Kay Van Norman is an internationally known expert in healthy aging. She directed the Keiser Institute on Aging, serves on national and international boards, speaks internationally and is the author of “Exercise and Wellness for Older Adults,” among other publications. Visit Kay’s website, Brilliant Aging.

This article was first published as “The Dignity of Risk” at Silvernest.com

Open Thread: Are You Serious?

How long this lockdown lasts depends on how seriously we take it.....or not.
Article

Is it a Strobe, or a Waterfall? You'll be able to 'name that firework" when you watch the festivities tomorrow.
Open Thread

Have you been able to get a haircut yet? Eat in a sit-down restaurant? Let us know in the comments!
Work & Money