Is Feminism About Having a Woman President?

Why now? The struggle centers on the fight for the Democratic nomination between Hillary Clinton and Bernie Sanders — a woman who is seen as a longtime advocate for women’s rights and a man who supporters view as the only path toward a more just and equitable America.

A poll in late January found strong support for Bernie Sanders among women 18 to 34; Hillary Clinton has a big lead among women 65 and up.

For many women post-50, there is no choice: A woman president is the culmination of years of struggle to gain basic rights that could all too easily slip away again, and if younger women don’t see this, it’s because they just don’t get it.

Encouraging all women to vote for Clinton, former secretary of state Madeleine Albright spoke about the “ladder” that women have climbed and evoked gender solidarity when she suggested that “there’s a place in hell” for women who don’t support one another:

Feminist icon Gloria Steinem, in an off-the-cuff statement that enraged many of her millennial fans (and for which Steinem later apologized on Facebook), said young women are only supporting Sanders because “that’s where the boys are” — implying she could see no other rational. She added that because they have lost power in this culture, older women are “more activist” than their younger counterparts.

Among the politically engaged older women who’ve joined the chorus is Helen Philpot, who blogs at Margaret and Helen. In a recent post, Philpot suggests that younger women take for granted rights their foremothers fought for. With her usual humor and passion, she argues for a Clinton presidency as the feminist movement’s capstone and says that by dismissing the importance of Clinton’s candidacy, the younger generation is also dismissing the importance of the feminist movement.

“Listen, I’m so old I might crack in half tomorrow.  It takes a lot of Bengay for me to feel the burn. I am still fighting for the right for women to control our own bodies and sadly I have yet to see a woman be elected President. Are you sure you can wait? Forgive me in advance if I am offending you, but  I didn’t put on my big girl panties for over 60 years fighting for this day just to have you [younger women] ignore its importance. You don’t have to vote for Hillary but you have to at least recognize how significant this all is.”

A Different “Brand” of Feminism?

Do young women really believe that feminism is “over”? A Washington Post poll found the opposite: More women age 18–34 (Sanders’ main source of female support) identify as feminists than do women 65 and older. 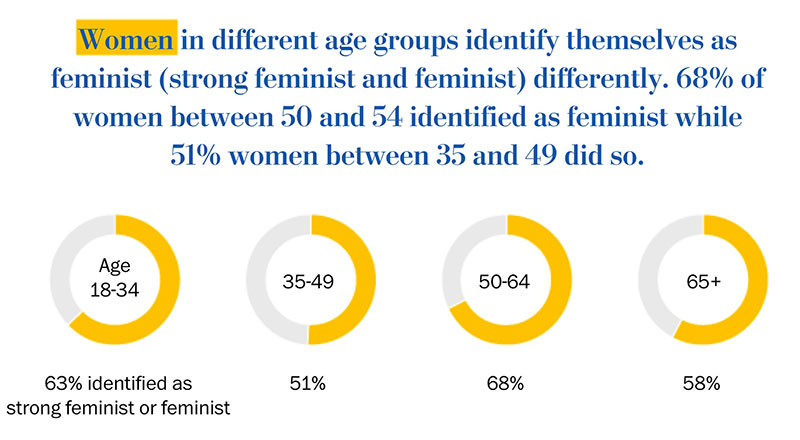 So what gives? Ask a woman in the 18–34 demographic why she’s supporting Bernie Sanders over Hillary Clinton, and she might say something along the lines of what University of Connecticut sophomore Ariana Javidi told CNN:

“Like my fellow young feminist women, I recognize that voting for a woman because she’s a woman is sexist, just like voting for a man because he’s a man is also sexist…. Young women like me realize that ones gender isn’t what makes them a feminist.”

Or as Sarah Grey wrote in an op-ed at The Establishment that’s been widely shared on the Internet:

“Gloria, the movement you made, as amazing as it was, had some serious flaws when it comes to intersectionality (as you know, that’s the idea that fighting for gender equality alone, without also standing shoulder to shoulder on issues of race, class, and other kinds of oppression, isn’t enough—in fact, it’s not necessarily even progressive).”

For Javidi and Grey, and many of their peers, men can be feminists, too — in fact, Sanders may be a better feminist than Clinton, some say — and true feminism reaches beyond gender to include the safety and well-being of all marginalized groups, including all women.

What do you think? Should women vote for a woman? Is feminism more than that? Join the conversation in the comments section below.

4 responses to “Clinton vs Sanders: A Generational Divide”