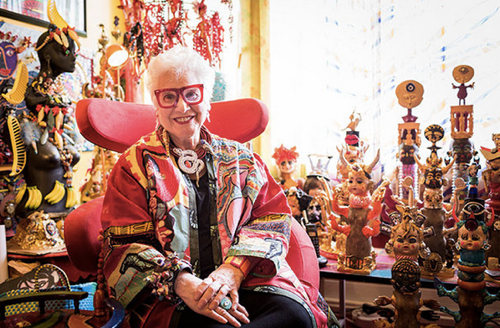 Maybe you’ve heard of Selfridge’s, the London department store whose founder is the subject of a current TV series. A few years ago, Selfridge’s launched an annual big deal event called Bright Young Things in which up-and-comers were given the store windows to show off their youthful creativity in art, design, fashion etc. This year, in a sign of the times perhaps, the store has recast the event as Bright Old Things – a way to highlight what’s being called the “retirement revolution” (no matter that several of BOT’s 13 participants are under 60 and a couple are under 40). Our favorite bright old things? Sue Kreitzman of Fabulous Fashionistas fame, who late in life gave up a successful career as a food writer to become an artist; former party girl and fashion editor extraordinaire Molly Parkin, now a painter; and product designer-turned-video blogger Tony Gibson, who says, “I chose video blogging because this technology is a breakthrough opportunity for everyone to grasp. With a small camera and the internet you can film, edit and broadcast, and your own TV channel of sorts can be initiated.” Read more about other BOTs who’ve recreated themselves in later life here.

Some 15 years after it launched, Wikipedia is still one of the most exciting experiments on the Internet – an online encyclopedia that regular people across the globe collaboratively write and edit, keeping entries updated by the minute and (more or less) accurate. Recently, a group of Wikipedians in Prague decided to teach seniors how to contribute and edit entries. Sounds like a win-win: Seniors become producers of digital information instead of simply consumers, and everyone gets the benefit of their knowledge gained over a lifetime. Click here to read more.

Betty White got a flash mob birthday surprise (or was it a “surprise”?) for her 93rd last week on the “Hot in Cleveland” set  – and we all get to watch.

Surfing the web can boost your health

We grew in an era when you listened to your doc and followed orders. But because health literacy and actual health are linked, we can stay healthier by taking responsibility for our bodies, asking questions and researching health information, especially if we have a chronic condition. So it’s not all that surprising to hear that researchers have found Internet use – along with social activities – tends to boost health outcomes. Here’s what is surprising: going online isn’t keeping us healthy just because we can read up on our conditions. In the University of London study, seniors who regularly used email, engaged socially online and challenged themselves intellectually were much more likely to improve rather than lose health literacy as they aged. Why? Their activities helped them stay mentally sharp, reach out to their networks for support and advice, and navigate the healthcare system. Read more here.

Is the art world resetting the narrative about aging?

Are recent museum shows of late Matisse and Rembrandt, along with a new feature film about the older  Turner, evidence that the art world has recognized a “seismic shift” in our understanding of aging? Desmond O’Neill, MD, who recently became the first European to be honored by the Gerontological Society of America, thinks so. “The narrative has been a simplistic one of loss and decline,” O’Neill told New American Media recently. “There’s a huge swing back against that.” But that doesn’t mean we should replace “loss and decline” with a “successful aging” paradigm, O’Neill says in a recent interview. Matisse, for example, could no longer stand up to paint late in life – so he sat down with scissors and paper and made some of the most groundbreaking art of his career. Read more here.

To what extent do the wages and conditions of the people who help care for old people at home determine the quality of care that America’s elders receive? Some say the two are inextricably linked and that a judge’s ruling last week that the US Department Labor cannot extend minimum wage and overtime protections to home care workers could affect elders in care as well as care workers. According to the organization Caring Across Generations, which advocates for caregiver rights, “The ruling came down in response to a lawsuit filed by profitable home care corporations.” Read more here and read Senior Planet’s article about the connection between worker rights and elder care.

Read of the week: The realities of ALBOhood

“At 65, when you’re called ALBO on a regular basis, there are some actual, identifiable… Changes. Your hips and/or knees and/or back and/or feet are no longer visited by pain; pain has brought a moving van and settled in with them in an ill-advised permanent relationship.” ALBO means “a little bit older” (words you my have heard more than once from your doctor, employer or grown child), and in a rocking and rolling piece of writing on the Daily Kos last week, Emmet nailed the experience of the would-be permanently ageless in the face of ALBO realities. Read “Baby Boomers Are Going All ALBO.”

LGBT seniors get a new center in the Bronx

Tom Esola has been doing the hourlong trek several times a week from his Bronx home to a NYC midtown senior center operated by SAGE, an organization that serves GLBT seniors. This week, the Times reports, SAGE is opening the doors to the first Bronx senior center for Lesbian, gay, bi- and transgender seniors “as part of a $1.5 million, city-funded expansion of L.G.B.T.-focused senior programs and support services across the five boroughs.”  Read more about the Bronx center and other new SAGE initiatives in NYC here.

You probably know someone who’s had a hip replacement – around half a million people in the US alone have the surgery every year and in 8 percent of cases it’s unsuccessful due to infection. A new technology could turn those failed surgeries into successes: Instead of inserting a temporary generic spacer to replace the infected bone that they have to remove, doctors are testing a made-to fit “bioceramic” sheath 3D printed from a material that contains calcium phosphate impregnated with biological compounds that encourage the bone to regrow. Meanwhile Japanese doctors are hoping to take the technology one step further and bioprint customs-made skin, bone, cartilage and joints. Read more here about 3-D printing in hip surgery and here about the Japan research, and lean more about 3D printing on SeniorPlanet.

More about those achy hips: the best forms of exercise for pain relief

Everyday Health asked experts what the best forms of gym exercise are for people with hip pain – yes, it hurts to move but a little workout can reduce the pain. The answers – with caveats: treadmill (unless your doctor has advised low-impact activity, walking is good; walking on a treadmill minimizes shock), elliptical (helps you restore your range of motion without impact; but an unstable foot plate could add to hip strain), stationary bike (gentle cycling is good for range of motion – if you get the seat height right); TreadClimber (works with your body’s walking stride, but you’ll need guidance from a trainer). Read more about the pros and cons of each option on Everyday Health.

The site Senior List has done us a favor by scouring the Internet for prescription discounts and discount clubs available to seniors with limited or no prescription insurance. What did they find? AARP’s prescription discount card, of course, which is available to members, along with the better known prescription savings programs from Rite Aid, CSV, Walgreens, Kmart and Target. The site also quotes Consumer Reports secret shoppers, who say that in many smaller pharmacies, all you have to do is ask. Other saving strategies: For some meds, pay cash instead of using insurance, fill 90-day prescriptions, see if you’re eligible for government help and shop aound. Read more here.

Diversity in medical research is essential and more needs to be done. Get the facts here.
Sex & Relationships

A new book indicates that retirement to a life of leisure is not all it's cracked up to be.