Consumer Electronics Week took over the Metropolitan Pavilion in NYC June 26 – 27, and Senior Planet was there, scoping out what’s new and searching for the products that best serve seniors. We asked three bloggers to name their “best in show.” Click here to read more about the award and here to see see all our Best in Show awards.

I walked into one of the most deafening environments I’d ever experienced at the Consumer Electronics Week show in New York last week.  It wasn’t a huge expo, but it had to be the noisiest. My hearing aids were so overwhelmed with decibels that I had to take them off to avoid getting a headache.

Most of the exhibitors were young, but there were many older visitors, mostly male. I wondered how they were coping. My mission was to find the products that best served us, the over-60 technology consumers; not an easy task in a show filled with gadgets for kids. But there were some gems.

Maybe the noise drew me to the Linx hearing aids by ReSound.  These miraculous little gadgets are the same design as my clunky Oticon hearing aids, but about half the size of the big bananas that rest on the backs of my ears.  And instead of being controlled by an audiologist who adjusts them during multiple visits with fixed settings, you can adjust them yourself in real time on your iPhone. They virtually become bionic ears.

Until now I had to carry around a Bluetooth streamer and remote on an ugly box around my neck – not exactly  a fashion accessory. The Linx has miniaturized the technology to the point that the Bluetooth is now in the hearing aid itself and settings are controlled by an app on your phone.

This hearing aid also has surround sound, adjusts to your environment automatically and/or can be adjusted for different environments manually. The app has both a volume control and different settings for “restaurant,” “all-around” “traffic ” and outdoors; you can adjust the treble and bass and the direction of the microphone. The hearing aid works as a wireless headphone, streaming phone calls and audio directly to your ears from your phone. It even has a “find my hearing aid” function.

I didn’t get to try out the Linx at CEWeek, but if they work as advertised they would have solved at least part of the audio overload I was experiencing. And according to a story in the New York Times, they do: A 65 year old hard-of-hearing pastor tested them in a noisy nightclub – the worst of all possible environments for hearing aid wearers. When he entered the club, he tapped on his phone to switch his setting to restaurant mode. “After a few adjustments,” the Times quotes him as saying, “I was having a comfortable conversation in a nightclub. My wife was standing next to me in the club and she was having trouble having the same conversation, and she has perfect hearing.”

The Linx do have two downsides.  The biggest one: They’re not cheap at $2,500 to $3,000 per ear.  Another brand, the HALO, also works with an iPhone app and is similar in quality BUT costs $1,000 less each. However, users on the Hearing Aid Forums  reviewed both and say the Linx has better sound quality.

The other downside to both the Linx and the HALO is there is no Android compatible app. It’s unlikely there will ever be one. According to the Linx representative I spoke to, Apple supports developers, which is how they came up with this app in the first place; it uses proprietary Apple technology. Developing a different technology for Android would be prohibitively expensive. 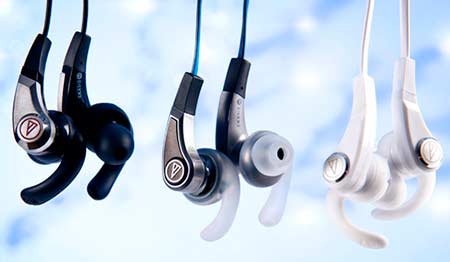 Right across the floor from Linx was my first runner-up: The latest in innovative earbuds from Audio-Technica (model # ATH-CKX7). I’m always looking for earbuds I can wedge behind my hearing aids so I can listen to books and answer the phone without buying the expensive and clunky streaming device that hangs around your neck (since I don’t have a Linx or HALO hearing aid yet). I’ve been depending on the popular angled earbuds for sound isolation, since I can wedge them behind my hearing aids, but they fall out, are uncomfortable and hurt after a while. Much more comfortable and easy to adjust, these Audio-Technica babies have a nifty little 360-degree rotating ear tip that adjusts to the unique angle of your ear canal for a personalized fit and better sound isolation; a curved C-tip design to fit the shape of your ear; and a microphone and volume control that actually work. (I’ve had a number of these and most don’t).  When I played with them a little, I got them to stay in my ear even with my hearing aids in – and without hearing aids they’re really comfy.  $62.99 from Amazon.

We all want to listen to tunes that we’ve downloaded to our smartphones or tablets on decent speakers, but Bluetooth speakers or plug-in speakers sound tinny and don’t separate the stereo. These palm-sized Damson Jet speakers are the first true wireless stereo speaker system with a right and left channel. The two speakers can be placed as far as 30 feet apart and communicate with each other to deliver in-sync stereo audio.  Despite the racket in the exhibit hall, I heard their powerful stereo sound. Measuring in at about 3 inches tall, they emit 20 watts of power per speaker, which blasts enough sound to fill even big rooms. Instead of generating the sound internally, which limits the bass on any small speaker, they transfer the full sound down into the surface they are placed on. The sound then radiates out through that surface. Thus the better the resonance of that surface, the better the sound! The bigger the surface – the bigger the sound!  You can mount them on a window to get the same sound outside as inside. Best, they’re relatively inexpensive.  $113 on Amazon.

Erica Manfred is a journalist, essayist and humorist who writes Senior Planet’s Aging With Geekitude weekly column about tech for seniors. Her articles and essays about everything from dentistry to divorce have appeared in the New York Times Magazine, Cosmopolitan, Woman’s Day, Consumer’s Digest and many other publications. Friend her on Facebook.

Sexpert Joan Price advises an older woman on how to revive her ability to orgasm alone and with her lover.
Technology

Mark your (online) calendars - Digital Privacy Day  - and Week - is coming up! Here's some tips about protecting your data.
Social Engagement

Which book should we read next?
Activism & Advocacy

Dr. Martin Luther King, Jr. was a powerful and inspiring speaker. Read this collection of his works and hear his passionate call for justice.