Smartphones are making news, and a lot of seniors are being left behind.

With the recent release of a major new survey showing that for the first time, the majority of Americans are using a smartphone, along with a new focus on the effects of smartphones on people’s daily lives, there’s an inescapable sense that this mobile technology is changing the world and anyone who is not part of the revolution is lost.

But do seniors need smartphones – or are they wasted on us?

New stats released last week by the Pew Internet and American Life Project, which regularly takes our national pulse via massive surveys, show that for the very first time, more American’s have smartphones than  “dumbphones” – and only nine percent of the US population has no cellphone at all.

Today, 56 percent of American adults use a smartphone, compared with only 35 percent just two years ago. 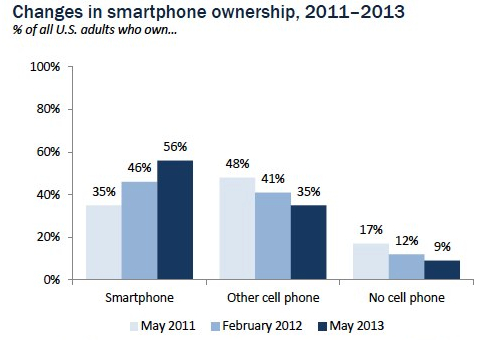 Relax. If you’re 65 or over, you’re in company – 82 percent of American seniors are still using dumbphones. Among people 55 to 64, that number goes down to 61 percent – still a majority.

Not surprisingly, money plays a big role in whether you have a smartphone or not; monthly data plans are costly.

From the Pew again: 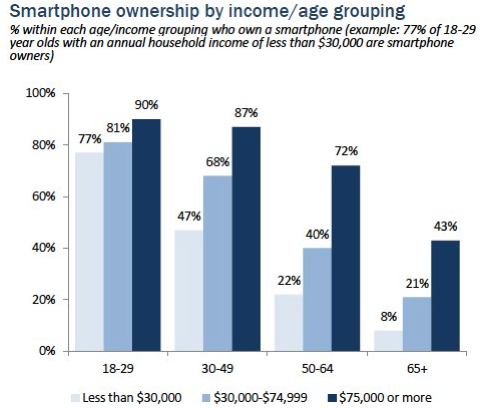 Then again, among young Americans on tight budgets, 77 percent have smartphones. For some of them the phone doubles as a computer, saving the cost of a desktop or laptop along with the monthly wireless connection fee.

Smartphones Have Their Issues…

Eight-one percent of all 25- to 34-year-olds have smartphones and are on them 24/7. And the wired generation is just starting to see they have a problem.

One tech writer recently mourned his loss of engagement with the world: While visiting an art museum with his wife, he realized that although he was surrounded by paintings by great masters like Pablo Picasso and Salvador Dali, he was spending his time staring at his phone. And late last month this short video by a young actress and writer, Charlene deGuzman, went viral and was featured on Fox News.

Are Smartphones Wasted on Seniors?

We oldsters are less likely to be tethered to our devices the way our kids or grandkids are; our old-school sense of etiquette was formed pre-Google, pre-Facebook, pre-immediate satisfaction.

A July 2013 stat from Business Insider 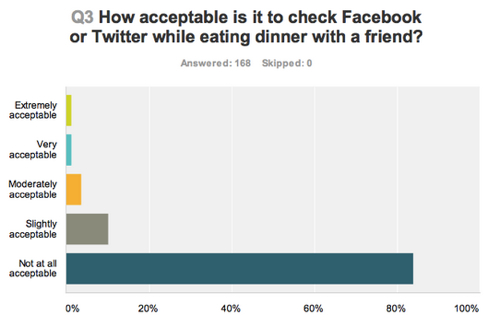 More than 80 percent of people age 40 to 60 indicated that it is unacceptable to check Facebook on your phone while you’re eating dinner with a friend; only 45 percent 0f 18- to 29-year-olds agreed.

Which either means that older Americans should be the ones using smartphones (we can keep our habit under control) or that smartphones are lost on us (who needs one? We can wait until we get home to check Facebook). What’s your view?

3 responses to “Are Smartphones Wasted on Olders?”