Inspiration can strike at odd times, in ways you least expect – Morrie Markoff knows that. As a hard-working machinist and all around Mr. Fix It, Markoff was repairing a toilet and about to discard the worn-out brass float when he realized how much it looked like a ballerina’s tutu.

Using his imagination and an arc welder, he created a small bronze ballet dancer, arm outstretched to hold the barre. It was the first of many unique metal sculptures he would fashion out of industrial scraps in the years to come. Little did Markoff know that these creations would be the basis of his first gallery show a half century later. Titled “Morrie Markoff’s 100,” the show of sculptures, oils and photographs opened to acclaim in 2014 at the Red Pipe Gallery in Los Angeles’ Chinatown Arts District, as Markoff was turning 100. 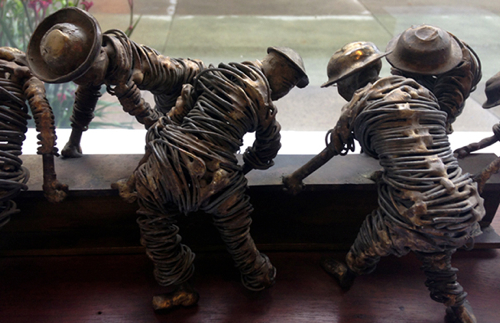 Stay tuned for a follow-up – he’d like to have another show, next time devoted to his photographs; Markoff is an accomplished photographer.

The invitation to show at Red Pipe was as unlikely as Markoff’s foray into the art world. He and his wife Betty were en route by bus to Home Depot, when they struck up a conversation with gallery director Tracy Huston. Markoff happened to mention the sculptures. Huston stopped by to see the work and invited him to show at the gallery.

Senior Planet caught up with Morrie and Betty while they enjoyed a sunny afternoon at their condo in Bunker Hill in newly revitalized, super-hip downtown Los Angeles, where they moved when Morrie was 98 and Betty was 95. Displayed around their living room are several of the sculptures, including chess players in a park, an eager shoe shiner at work and a couple with a child, all dozing on a park bench as the father still clutches his newspaper. 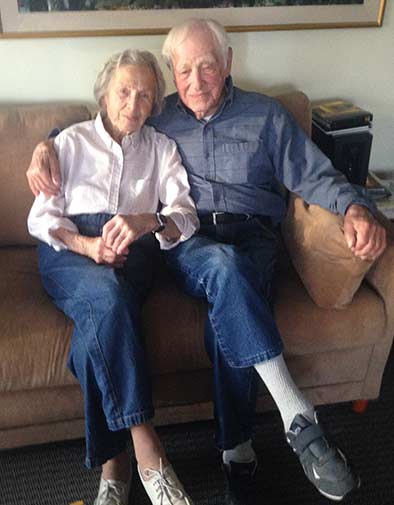 What did you say when you were invited to show at Red Pipe?

I didn’t want to at first. Betty will tell you I fought it. Then I said, “Well, why not?”

People at the show who had been to galleries all over the world were very much surprised to see an amateur and the work I turned out. That made me feel very good. I feel like it enhanced my life.

Would you do another show?

If I could get all my work together, it would be highly flattering. And I think it would be entertaining and an encouragement to older people to look at a guy who’s not an artist and what he turned out. If I could do it, they could do it.

You’ve never had an art class, yet your sculptures are striking and creative. What does creativity mean to you?

Creativity is living. You are alive when you create. If someone gets an inspiration to do something, I would encourage them to follow it. Being a machinist, I can make things from nothing. But I’m not an artist; I would have difficulty just doing matchstick figures.

What’s the most exciting technological invention in your time?

I would say the computer, absolutely. The invention of the computer and what it has led to… it’s gotten the world together. Children of four or five begin to work on computers. They have the world at their fingertips.

You have a Facebook page, but it’s been inactive. Do you spend time on it?

No – we have so many friends on Facebook, but I don’t want to get involved. I have enough involvement in my life. If someone were to write me, I’d want to answer. They’ve gone to the trouble of writing me and I think they deserve an answer. I’d get an answer, then an answer to an answer. I’d get so involved… I would rather not touch it.

What’s the best thing about being 101?

Being around. The alternative is terrible.

What are you up to these days?

At the age of 101 my visibility is very good. I can read, but not for long. I get tired reading. My walking is limited. I’m on the computer, I read periodicals. I have a friend who sends a lot of stuff from the Internet – oddities, mostly. I write letters to the editor. I’ll do that after I read something in the newspaper and what they said is not my viewpoint, and it’s not wholly correct.

We live a simple life but an involved life. As you get older, you are able to better put life in perspective. All the trappings of wealth, none of that appeals to me at all. Fame, fortune have no appeal to me. But I enjoy life, simply living it. I wake up in the morning, the sun is shining. It’s such a pleasure to be able at my age to sit and read and do the things I enjoy doing.

We’ve talked for a few hours, yet you have never mentioned an ache or a pain. What’s up with that?

All old people have aches and pains. We went to see the doctor the other day. I have some blood problems. It’s pretty hard to get to this age without health problems. Why talk about it? 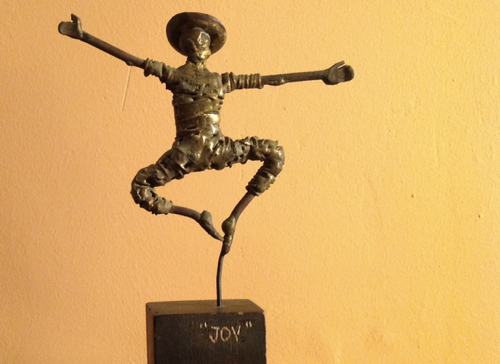 What does creativity mean to you? Share your perspective in the comments section below.

Photos of the Markoffs: Kathleen Doheny

Learn how to appreciate all you have, even during tough times, with a gratitude exercise or two... and revisit our open thread on gratitude to share your insights!
Book Club