Business cards can get crowded when your career is several decades long. Joe Vento’s is so crowded, it has two sides. On the front, it says: PIANIST-ACCORDIONIST-BIG BAND LEADER- LAS VEGAS-NEW YORK-LOS ANGELES (& THE WORLD). And then there’s the other side: COMPOSER/ARRANGER/MUSICOLOGIST.

Over the years Vento has performed with Count Basie, Jimmy Dorsey, The Mills Brothers, Nelson Riddle, Bob Hope and a host of other well-known artists.

The Grammy Award-winning musician has been on Jimmy Kimmel Live, Johnny Carson, Ed Sullivan. For years, he was part of the trio The Three Suns.

The Three Suns went the way of postwar pop, but Vento kept going. And he has no plans to stop.

On this sleepy Sunday afternoon, he’s getting ready to lead his Joe Vento Big Band – 18 musicians who gather at the Las Hadas Restaurant near LA almost every Sunday to belt out big-band tunes.

Vento has just driven in from Las Vegas, where he lives and, wearing his signature fedora, performs four nights a week in the Barrymore’s Royal House Resort lobby. 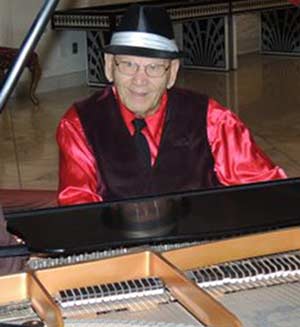 Today, he’s comfortably dressed in a shirt with an Army Rangers patch to reflect his service in World War II, Korea and Vietnam.

Before taking his place to lead the band, Vento pauses to talk about where he’s been, to name-drop and to answer some questions from Senior Planet.

So, how old are you?

First they told me one birth date, then the other. I was born at home, and records weren’t good back then. So I’m actually 95.

How old do you feel?

I do conventions and private parties, and I play piano in the Royal House Resort lobby Wednesdays through Saturdays – Beethoven, Brahms,  jazz, Bob Wills and the Texas Playboys.

I play here [in Los Angeles] when I can make it down.

What do you wish you could have done that you haven’t?

I’ve been to the White House to perform six times. President Truman was the best. I’ve performed for Walt Disney, Ike Eisenhower and his wife Mamie, Nixon and JFK. I performed for many of Howard Hughes’ private parties. As leader of The Three Suns trio, I was on TV shows, including the Tonight Show with Johnny Carson, Steve Allen, Dinah Shore, Ed Sullivan and Jerry Lewis Telethons. I’ve played a musician or bandleader or scored music for films and TV shows, like “KOJAK,” “Man In A Gray Flannel Suit” and many others. I’ve played music in Japan, China, Asia, Europe and the mid-East…

So, that doesn’t leave much. Do people tell you to slow down?

All the time. I don’t say anything at all. I just let them talk.

What’s your take on modern technology – computers, smartphones, and so on?

I’m right up on it. I have four or five laptops, and I keep them all busy. I write songs on them. I have an Android smartphone. I had an iPhone, but didn’t like it. I went back to Android.

How do you stay healthy?

I take it a day at a time. I live very simply. I had chicken soup for lunch today without the chicken. I had an avocado in it instead. I’m a lifelong vegetarian.

I grew up in the Depression, in Brooklyn and South Pasadena. Dad would ask me to kill a chicken. I couldn’t do it. Once the chicken was on the table, I’d pretend to eat it, but I would actually feed it under the table to our dog. My mom never ate meat, and she was 107 when she died.

You live in ”Sin City.” Do you gamble?

It means having respect for others and helping others when they’re in need. That was the golden rule in my day. When I’m called upon, I perform at old-age homes and at VA hospitals. I have over 25,000 hours in donated time, volunteering.

These younger celebrities… they’re a bunch of wild animals. Justin Bieber, Britney Spears. In my day, they wouldn’t even be known.