Harriette Line Thompson isn’t your typical runner. She’s the first to admit she didn’t train much at all for her latest marathon – her 15th in as many years. She doesn’t talk about gear or carbo-loading.

Yet earlier this month, Thompson set a new world record. She finished the Suja Rock N’ Roll San Diego Marathon in 7:07:42 – the fastest ever for a women 90 and above.

Thompson is 91, the second oldest person to finish a marathon in U.S. history.

She had just finished cancer treatment when she ran the grueling 26.2 miles as a fundraiser for one of the event’s charities. She says she’s not really competing when she runs – she’s trying to raise money for a cause.

Running is relatively new to Thompson, but the spotlight is not. She has spent much of her life as a concert pianist, touring domestically and abroad.

We caught up with the nonagenarian after she had taken the red eye back from the California race to her home in Charlotte, N.C.

You started running marathons at 76. Why?

Back in 1999, somebody in my choir was collecting money for the Leukemia & Lymphoma Society [one of the official race charities]. She said she was going to walk the marathon in San Diego. I decided to run it.

I soon found out, walking or running 26 miles is a lot different than walking around the house. I was not a runner then. I just didn’t know what was going on. I wasted 15 minutes in the bathroom line at McDonald’s.

Do you think of yourself as an athlete?

No, absolutely not. I’m not really a professional runner. I have always loved to be active, though. Growing up, I went swimming every day. And I started begging my mother for a bicycle when I was six. I finally got one when I was 12, when I had to go two miles to junior high.

I’ve always been active, but I’ve never really planned it, it’s just part of the day.

What does running the marathon do for you?

I feel younger when I’m running – unless it’s the last few miles of a marathon. When I finish a marathon, I am relieved that it’s over. A whole week later, I still feel great. It’s exhilarating.

And you also give back to running by your fundraising – the thing that got you started in the first place.

Through the years, I’ve raised over $90,000 for the Leukemia & Lymphoma Society. What’s really nice about this is, people are now sending in money to the society in my honor. It’s so wonderful. I didn’t expect that.

Every year, when I fundraise, I tell people, ‘I think this is my last year.’ I’ve been saying that now for a few years. They tell me I don’t even have to run it anymore, they will still donate.

What do you know now that you wish you had known when you were 30?

I wish I would have known that worrying is a waste of time. I don’t worry about much now. Often, we make mountains out of molehills.

In race photos of you, your lipstick looks perfect, despite sweating and weather. How do you manage that?

I guess that’s the brand, it is supposed to be long-lasting. I don’t remember what brand it is, though.

Will you be back in San Diego next  year for your marathon #16?

I’d love to do it if I am still here. I think I’ll do better next year. I’ll be able to train more. This year, I had just finished getting radiation for skin cancer on my legs. I also have had cancer in my mouth, and I have gotten rid of all that.

I think it means being positive. I hate to be negative. I feel there is no point in that –  I don’t want to dwell on the bad. I like to think of the best parts of life. 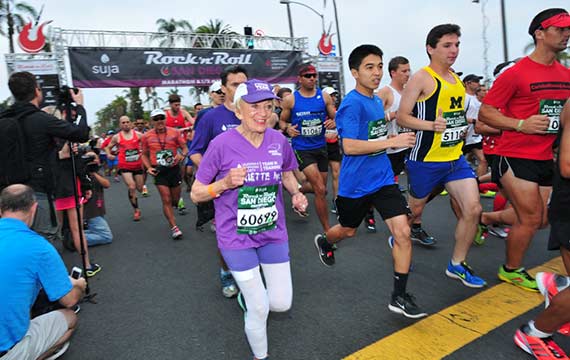