By Erica Manfred Tuesday, September 8, 2015 No Comments Share This:

Is it a trend or just an odd coincidence? Either way, we’re grateful for two terrific recent movies about aging rockers, starring Meryl Streep, 66, and Al Pacino, 74, that dramatize the issues many of us are dealing with as we age: divorce, regret about missed chances, strained relationships with grown children, coming to terms with life choices. In “Ricki and the Flash” and “Danny Collins,” these heavy-duty themes go down with an earful of musical time warp as Streep and Pacino sing their hearts out to tunes of the 1960s, ’70s and ’80s.

Hollywood is getting the hang of Boomer late-life nostalgia and regret, a soulful blend. Rock and roll will never die —but we will, and we’re making amends.

In Jonathan Demme’s “Ricki and the Flash,” Streep — who not only sings hits by Springsteen, Tom Petty and Lady Gaga, but is good enough to open for them — plays Ricki Randazzo, a singer who refuses to let age define her. Dressed from head to toe in sexy black leather, she belts out cover songs every night in sleazy half-filled bars while an enthusiastic bunch of gray-haired fans dance and sing along. Ricki represents aging musicians all over the country who never gave up despite never having made it and who are still playing small venues for fans who never moved on from the music of their youth.

Ricki left her family and the comfortable life of a wealthy suburban mom to pursue her rocker dreams. The costs of her choice come back to haunt her when her ex calls to tell her to come home and rescue the daughter she hardly knows, played by Streep’s real-life daughter, Mamie Gummer. Having been abandoned by her mother, Gummer’s character is now suicidal after being dumped by a cheating husband. Ricki, who works as a supermarket clerk, is too broke to buy a ticket, so her ex, who lives in a McMansion, has to front the fare.

There’s nothing all that new about regret and remorse, but “Ricki and the Flash” might have put its finger on a predicament that’s fairly unique to aging Boomers; we were the first generation to claim self-fulfillment as our birthright, and many of us chose to put duty and responsibility aside to follow our dreams. While Ricki’s predicament may be extreme, it raises issues familiar to many of us. Choices, whether they are good or bad, come at a price, and that price is something we face with age. Did we do right by our kids? Should we have pursued that dream just a little harder? Was that divorce a mistake? Women, especially, grapple with family versus career, and may have given up one for the other. As Ricki says bitterly at one point, “No one blames Mick Jagger for leaving his family to play music.”

Pacino’s Danny Collins, directed by Dan Fogelman, doesn’t have money problems, but he’s dealing with a double dose of existential angst. A former heartthrob who long ago had a child with a groupie, a son he’s never met, he has since become rich playing oldies concerts for adoring female fans who’ve aged along with him— and he’s heartily sick of himself. He snorts cocaine and sleeps with groupies one-third his age to dull the pain. 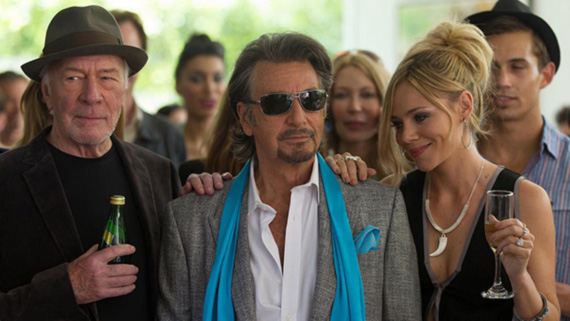 Eventually both Ricki and Danny come to terms with the painful realities of their lives and seek redemption by reuniting with their estranged families. They’ve finally realized that they need to grow up and take responsibility for themselves and the children they’ve created. They decide to make commitments—to their kids, their love interests and, in Danny’s case, to quitting drugs. Will they go on with their careers as rockers? Neither film provides an answer, but we do know that they’ve changed their lives in important ways.

If all this sounds a tad formulaic, it is. “Ricki and the Flash” and “Danny Collins” are Hollywood feel-good films, predictable and sentimental. But they have a lot to say about aging—and they sure are a lot of fun to watch.

“Ricki and the Flash” is currently in theaters. “Danny Collins” is available to stream on Amazon Video and Google Play

Have you seen either of these movies?