“It would never have occurred to me to have wine with lunch, take a siesta in the afternoon or stay out until 2:00 in the morning – even on New Year’s Eve,” she says.

But McCann, 63 and a former journalist, and her husband Rich, 70, a retired healthcare administrator, decided they were not interested in aging in place, or as one friend of theirs put it, “sitting around waiting to crumble.” They were ready for more urban pleasures and the richness of an international community. They had visited Seville, Spain a number of times and fallen in love with it.

“It’s a friendly, sociable city with a great climate, vibrant street life and just enough expats to give you someone to talk to who understands your language and gets your jokes,” McCann told Senior Planet. 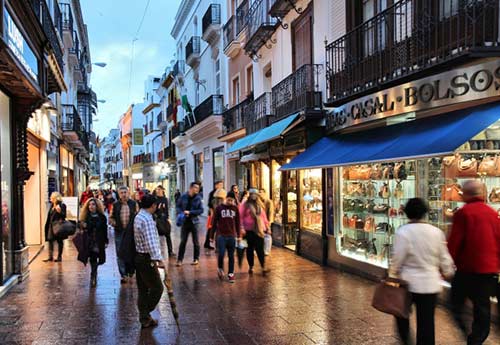 Moving to Seville has been tremendously revitalizing for both Karen and Rich. He is busy learning to play the ukulele, studying to be a consulting detective and planning their next trip through Europe. Karen blogs and writes books about their adventures, and thanks to a painting class that a Spanish friend dragged her to, she also has launched a career as an artist.

We spoke with Karen via Skype, which she relies on for free international calls.

Why did you want to retire abroad?

We feel more alive here. Living in any foreign country and struggling with such challenges as a new language, the metric system and odd eating schedules keeps you on your mental toes a lot better than the recommended alternatives, such as sudoku or bird watching.

Living in a foreign country is a unique opportunity to reinvent yourself. Where else could you be a completely different person outside of the witness protection program? You get to hit the reset button on your life.

Different priorities. Americans are brought up to be goal-oriented, to work 24/7, to achieve and accomplish. The Spanish value time with friends and family, and plan their lives to have time with people they love.

I come back often to California and have to make an appointment two weeks in advance to have lunch with my sister. In Seville, you drop by and ask people to have coffee. Life is much more spontaneous. Europe has gotten the balance right between work and play, work and home, work and what feeds the soul.

What do you like best about living in Seville?

One of the things I love most is people aren’t dismissed as irrelevant as they age. Women especially feel invisible in America, but an older woman in Spain commands a lot of respect. They have processions during holy week before Easter, where women parade with black lace mantillas. The young ones look harassed; the old ones look confident.

Also, you don’t need a car here. We walk everywhere. Seville is a small city – you can walk from one side to the other in 25 minutes and you constantly run into friends.

What’s the worst thing about it?

The economy. Poor Spain. There’s a 25 percent unemployment rate, and for people under age 30 it’s 60 percent. The young people who are smart and lucky go to England and Germany. The ones who stay sit around doing very little.

What surprised you most about living in Seville?

How the generations mix. In the U.S., friendship is stratified along age lines. In Seville we have friends in their 20s and in their 90s. And we consider seven- to eight-year-olds friends, too. Some of our closest friends are in their 40s. The expat community is small, so if you find someone compatible, you don’t care how old they are. You enjoy their company. I’ve never lived in a place that was so open.

On the other hand, this is a very traditional society, and it doesn’t go out of its way to embrace diversity. People of other cultures (yes, including Americans) are still something of a curiosity, and many locals feel awkward and uncomfortable around us. The Sevillanos tend to socialize mainly with people they have known since baptism.

Do you need to know Spanish?

You don’t need to know it in advance. But you do want to study and learn Spanish, because the locals don’t speak English. We arrived here with 12 words of Spanish and jumped in, but it’s a struggle when you’re older. Still, we manage to stay up till 3am with Spanish-speaking friends having philosophical discussions, even though we’re sloppy with prepositions by 4am. The locals never look down their nose if you don’t speak Spanish, but you won’t enjoy living here as much without knowing the language. Also, you do have to figure out the metric system.

How are the restaurants in Seville?

The food is great and eating out is as inexpensive as preparing food at home. There’s a wide variety of restaurants, from traditional little cafés where someone’s grandmother is cooking in the back to overpriced tourist traps, to trendy new fusion places that are introducing the more adventuresome Sevillanos to international cuisine. It’s quite common to spend an evening here doing a “tapeo,” which is going from bar to bar and sampling various tapas (small plates of food) in each bar. Even when you’re eating in one place, it’s common to order tapas and share them so everyone can nibble lots of different things.

What do you do for health care?

Medicare does not cover you outside the United States. We have local medical insurance for minor ailments. The best coverage can run 200 to 400 Euros a month depending on age. (Check out the Sanitas web site. This is the insurance we use.) The quality of care here is very good. Spanish doctors make house calls, which is amazing. Pharmacists are wonderful as well – I had a small eye infection and they gave me meds. When it comes to exotic surgeries, however, I’d prefer to have them in the U.S. If we had a serious health problem we would come back to the States.

How do you keep in touch with family and friends at home?

Fourteen years ago when we first started coming here, there was little Internet access, so being overseas meant being cut off from family and friends. But now with the Internet, cellphones and Skype, you can live here and not feel isolated from the people you left behind. We pay all of our U.S. bills online – we do everything online. That’s only been possible recently.

Do you still travel?

In 2013, we decided to see whether a couple of sexagenarians could still have spontaneous adventures on the road, so we bought Eurail passes and set out with no time limit and no fixed itinerary. [Karen documented the often hilarious, occasionally harrowing three months they spent riding trains through Eastern Europe here.]

What Does Aging With Attitude Mean to You?

The phrase calls to mind my grandmother, the silent film actress Ramona Langley. She was a wild young woman on the vaudeville stage and back lots of Hollywood; later in life she managed to be a bad influence on us kids, encouraging us to eat ice cream before dinner and marry for money. Some of her advice may have been questionable, but she taught me a lot about living life to the fullest. She maintained her zest and plenty of attitude every day of her 95 years – or possibly more; she lied about her age for so long, nobody was ever quite sure how old she really was. 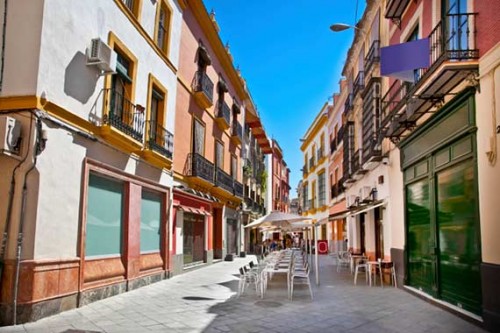 Cost of living: Moderate Expat couples in Seville tend to have monthly living expenses in the range of $1600 to $4300, which includes a decent two- to three-bedroom apartment in a desirable section of the city center, utilities, local health insurance, groceries, eating out and spending money. Having a car (most people walk everywhere) skews it higher.

Climate: Variable Seville has warm, sunny days in spring and fall, and mild winters, but summer days can be scorching. Live for the siesta.

Expat Community: Small but welcoming The expat community is in the hundreds, including people from all over the world. The nonprofit organization Internation has a Seville chapter and holds gatherings and meetups.

Crime rate: No worries Despite the poor economy, crime is not a problem. It’s safe to walk in the city anytime of night – violent crime is virtually unheard of, and theft is rare.

Human rights/Civil liberties: Good  Spain has been criticized for actions against migrants, and recently for a new restrictive abortion bill, but generally the government respects the human rights and civil liberties of its citizens. Read more at Human Rights Watch.

Best places to stay: Center of town This is a walking city, and pretty much everything you’re likely to want to visit is within a 15-minute easy stroll of the cathedral. If you want to check out the city, McCann recommends these options:

Las Casas de la Juderia is classic Seville, a series of old palacios (mansions) joined together in a rabbit warren of hotel rooms and tiled patios; it’s been a favorite with Spaniards and expats for generations. There’s an upscale restaurant, comfy lounge, and cozy bar.

Hotel Amadeus is a charming small hotel in the center with a musical theme and, in one of its several lounges, a piano for those who actually are musical. Good value for the mid-range price.

The Boutike Hostel gives budget-minded travelers clean, basic rooms and a roomy, comfortable, attractive common space on the ground floor, with sofas and a full kitchen. They provide a free breakfast and a discount at the owner’s other business, the Cuesta Sport fitness center.

6 responses to “Aging Out of Place in Seville, Spain”