Welcome to our new series, Aging Out of Place. We’ll be talking to seniors who’ve said no to aging in place and yes to digging up roots and replanting themselves someplace cheaper, warmer or easier. Or all three.

Not long after celebrating his 60th birthday, Don Murray and his wife Diane experienced a cascade of events that forced them to rethink how they would live during what was supposed to be Don’s “golden” years.

First, came a heart attack. Then a second. Not long after that, Don lost his job administering a nonprofit organization and with it, his blue-ribbon insurance coverage.  The coup de grace was the “Panic of 2008,” when the bottom fell out of the stock market, cracking Don’s retirement nest egg to smithereens.

They thought of giving up their home on Florida’s Gulf Coast — but where could they live on Don’s social security? “Frankly, I was worried,” Don says.

Then, while trolling the internet, he discovered the living-abroad phenomenon and thought, “We could do that.” And so his year of web-enabled armchair expat living began.

Don researched all the possibilities, creating spreadsheets of how places stacked up in terms of things that mattered to them, from weather patterns to coastal real estate prices. They joined online forums where they could get their questions answered.  The place that seemed to fulfill their need for authenticity and their budget was coastal Ecuador. That was that. They decided to eliminate the cost of a go-see first visit by just making the jump, downsizing from a house to what could fit into six suitcases and moving from an American suburb to a fishing town where few people speak English.

San Vicente, Ecuador is far from the typical golf and tennis beach resort with maids and gardeners. Rather it’s a simple rustic town, which was just what the Murray’s wanted. Their language skills had to accelerate very quickly.

We spoke with Don Murray by phone from his rental condo in San Vicente. 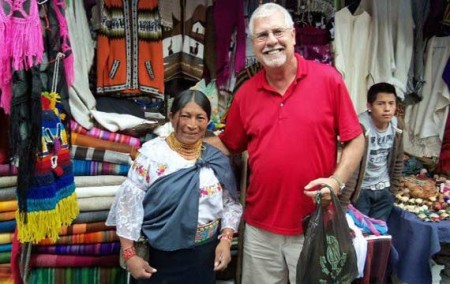 What’s the best thing about living in Ecuador?

The ability to live a self-reliant life. I enjoy the lack of infrastructure. You have to take care of yourself as I did when I lived in Alaska years ago. You have to be prepared to drive the back roads, and if the car breaks down, you can’t just call triple-A. You fix it yourself.

San Vicente is hours away from the nearest big city like Cuinqo, which has excellent, world class health care. There are two hospitals ten minutes from San Vicente, but they can’t do cardiac catheterization. They may have the equipment but it’s in ill repair or the one doctor that you need may not be available for five days.  There’s no blood supply. Routine care is just fine, but if you need anything serious, say a scan after a head injury from a fall, there’s no scanning equipment.  So the lack of good medical care is discouraging.

Will you ever move back to the U.S.?

No. The North American lifestyle is one of consumerism and consumption. We were certainly part of that for a number of years, but we learned quite quickly we could do better. When we first moved we had just my social security, and to be able to live on that was crucial for us. So we made a budget of $1500 a month, and it included some saving.

Are either of you working now?

We both write. It’s always been a passion for me. But we choose not to have any full-time obligations to anyone right now.

How does Latin culture differ from your experience in the U.S.?

The stress level in Latin America is much lower. You have no choice but to relax. For example, say you need something from the hardware store. When you get there, you find it closed and a sign that says, “We’re gone to grandpa’s birthday and will be back in four days.” After a while you absorb that into your being. Nothing is an emergency now.

Any effort to speak Spanish is welcomed. People are very patient, and they’ll help you along. After being in San Vicente just two months, we had a birthday party for Diane and 20 people came. We wouldn’t have more had we been in Florida. About half were Ecuadorians, and the others were expats from Bahia, a town across the bay. Bahia was where we went when we wanted to meet other expats. It’s easy to connect with other gringos. Meeting Ecuadorians is harder, but after a while you feel more comfortable.

Do you have suggestions for others who might be considering aging out of place?

Think about things that you want in your life – do you want the cultural life of an historic city or do you prefer the quiet and solitude of a little beach town? Know how you feel about conveniences — like access to a big box store. And don’t buy a house or a condo right away.

What does “aging with attitude“ mean to you?

Being able to say “yes” to as many opportunities as possible. Whether it’s ordering a meal I’ve never had before or having an experience I’ve not done before. It’s trying new things.

Just two weeks before we talked with Don, he and Diane had made another move, this time to the Yucatan in Mexico. As much as they loved their life in San Vicente, which you can read more about in Don’s book Our Ecuador Retirement: The First Eight Months and on his website, they were prompted by a friend’s death to find a place that offered timely health care not available in San Vicente. The heart problems Don had ignored suddenly got his attention. “San Vicente isn’t a good choice for a heart patient. I didn’t want to continue rolling the dice,” Don says.

Take a closer look at San Vicente by riding through town with Don in this YouTube video:

6 responses to “Aging Out of Place in San Vicente, Ecuador”