Welcome to Aging Out of Place. We’ll be talking to seniors who’ve said no to aging in place and yes to digging up roots and replanting themselves someplace cheaper, warmer or easier. Or all three.

Carol Merchasin and her husband Robert are planning on living a long time… a really long time. Now 68 and 69, they’re banking on being blessed with their mothers’ longevity genes; her mother is 93 and his is 102. That’s why, when the Merchasin’s turned 60, they started wondering how they could avoid touching their nest egg for at least another decade.

The answer: move to Mexico. It was close enough for Carol to easily travel to the U.S. for occasional consulting jobs (she’s a former lawyer who does workplace trainings), and the lower cost of living would allow them to support themselves into their 70’s by working only part time.

After closing their home near Boston, the Merchasin’s made the move and now spend the greater part of the year in the colonial mountain town of San Miguel de Allende in central Mexico.

San Miguel is a sprawling city in the central highlands that about 5,000 expats call home. It’s said to be one of the prettiest towns in Mexico, and in 2008 was named a UNESCO World Heritage site. The cobblestone streets, Mexican Baroque architecture and town square make the historic district a center for art galleries, markets, restaurants, shops and festivals. (Tip: According to Carol, another colonial mountain town being “discovered” by expats and a good place to check out is Patzcuaro Michoacan.)

Since resettling, Carol has discovered a new career—writing essays. Her first collection, “How it goes in Mexico: Essays from an Expatriate,” will be published in February by SheBooks. (A small collection of the essays is now available on Amazon.)

We spoke with Carol about life as a senior expat in San Miguel. 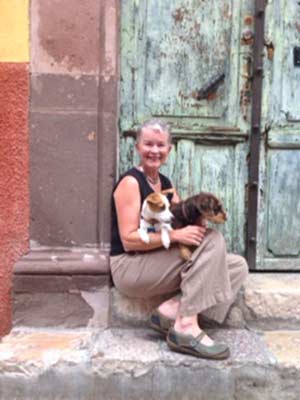 What is the best thing about living in San Miguel?

I love the people, the culture, and the pace of life. There is a civility and a kindness among the Mexican people that is extraordinary. And, of course, it doesn’t hurt that the weather is wonderful, the town in completely walkable and the architecture is stunningly beautiful.  It leads to a very satisfying pace of life.

When we got here, we fell in love. We had planned to visit different colonial towns, but we were in San Miguel maybe eight days when we bought the house we still live in. Ours is a very San Miguel story. People come and they either never leave or they go home just to pack up their entire lives and come back.

Dealing with the bureaucracy. It’s not efficient and also a bit abusive. It took me seven trips to get my visa. I misplaced one of the papers I needed and found there was no easy solution. Robert had to go to several different agencies to register to pay our taxes. That’s partly because the right hand of the bureaucracy often doesn’t know what the left hand is doing.

San Miguel is a popular tourist destination, but what do expats do who live there full time?

We live our lives in San Miguel very much like we would anywhere – quietly and slowly. Robert and I work in the mornings, and in the afternoons and evenings, we might go to the library, sit in the Jardin [the town square] and people watch, have a coffee with friends, go to the movies or out to eat.

For those who are more social, the presence of a large expat community means there’s is much to do, from yoga to Zumba, golf, tennis, art classes, bridge groups, meditation centers and a wonderful Lifelong Learning program with interesting courses. There are also 82 non-governmental organizations in San Miguel, so there are many volunteer opportunities for those who want to help the community.  The extraordinary number of activities makes it good for single seniors, too.

How is the health care?

We still have our Medicare to use in the U.S. but we both have been in hospitals in Mexico. My husband had retinal surgery, and I had an angioplasty here. The hospitals are very modern, and the doctors never seem rushed. We had to pay for the operations, but the cost is about 80 percent less than in the U.S.

We also have Medevac insurance [medical evacuation insurance] for emergency evacuation to the U.S.

What has “aging out of place” meant to you?

In San Miguel we found a life that was not available in the U.S. at any price. I have more time, more autonomy, a year-round good climate and the Internet. And Mexico’s proximity to the U.S. allows us to return to visit our family.

How often do you go back?

We go for five weeks over the Christmas holidays to visit our son and my mother. Robert goes back several times a year to visit his mother.

When we first moved, I went back to work about 10 times a year for two or three days. Now that I’m writing, I’ve taken on only one consulting project.

It means living with some kind of purpose, something that wakes you up in the morning and carries you through the days, months and years. I want to be as engaged in my life in my 70s, 80s and beyond as I was in my 20s and 30s. I want to have some intention about this last wonderful part of my life.

Every day, I read Mary Oliver’s quote, “I don’t want to end up simply having visited this world.”

16 responses to “Aging Out of Place in San Miguel, Mexico”

How's your progress been getting the vaccine? Take our poll and tell us your vaccine story in the comments!
Open Thread