In Aging Out of Place, we’ll be talking to seniors who’ve said no to aging in place and yes to digging up roots and replanting themselves someplace cheaper, warmer or easier. Or all three.

For years Sheldon Penner, 65, knew that he would return to live permanently in Thailand, his favorite vacation spot, but he thought that retirement was at least two years away. Instead, reality bumped the move to April, 2014.

“My computer consulting business had been going downhill, and I had to make a choice–stay in the San Diego area and dip into my savings or retire early and move to Thailand where the cost of living is so much lower.”

Physically pulling up roots wasn’t too difficult. As a single man sharing a rental apartment, Sheldon was unencumbered by family responsibilities or real estate. But giving up his social connections and cultural interests was challenging. “One of the hardest things about leaving San Diego was walking away from a very vibrant improvisational group that I had labored for several years to become a part of. I was finally being accepted into it, and I was becoming good at Improv.”

Affordability, though, pointed to Thailand and Pattaya, a lively tourist town about 100 miles from Bangkok on the Gulf of Thailand. Pattaya is known as much for it’s nightlife as its pristine beaches, both of which attract international tourists and Thai vacationers. Although Sheldon had visited Pattaya before, living there, he quickly discovered, was more like being a perpetual tourist than a resident.

Jomtien, a nearby beach town, offered a more residential environment. It’s a popular second-home site for Bangkok residents and a full-time home for retired expats from all over the world. So after a month in Pattaya, Sheldon moved to Jomtien. “The place I had in Pattaya felt like a hotel room,” he says. “Here, my studio feels like a real apartment.”

Eventually, as he becomes more adept at the Thai language, Sheldon may move further away from the expat community, but for now he finds being in a largely English-speaking community easy and supportive.

His financial well-being is turning out to be even better than he had anticipated. Before making the move, Sheldon made a chart of expected expenses, and he’s found that in several instances, such as rent, he overestimated his costs.

Although his social security is less than it would have been had he postponed his retirement a couple of years, the shortfall hasn’t been a problem. His social security and a small annuity more than cover his expenses. “I love that I can live comfortably on a small income,” he says. 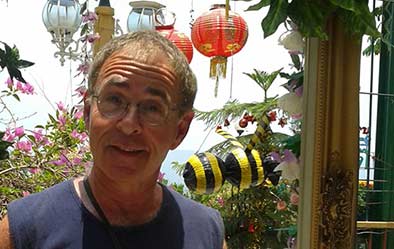 What do you like best about living in Jomtien?

Jomtien is such an international community. I love being able to mix with people from all over the world. Russians, Swedes, Americans, Brits… I have friends from all of those places. It’s wonderful. The Thai people are very friendly, outgoing, and welcoming as well.

What is the worst thing about living there?

It’s hot! And sticky! April, May and June are the hottest times of the year, and the heat can be brutal. It’s in the high 80’s with very high humidity. I do have air conditioning, and there’s a swimming pool, which helps. Also, since I live in a beach community, I can wear a tank top and shorts all the time. I couldn’t do that in Bangkok.

Was it difficult moving to Thailand alone and not speaking Thai?

I looked up a few people who I had met on previous trips, but mainly I relied on the gregariousness of the people I met when I got here. Vacationers – and that’s who I mostly met in Pattaya – are always outgoing and eager to share their experiences with others, so it’s very easy to socialize with them.

Many people, especially people who are in business and have expat customers, speak at least some English. I have enrolled in a language school and I am attempting to learn the language, reading it as well as speaking it.

What surprised you about living in Jomtien?

I thought I would have to give up some things I enjoy, notably theater. There’s no theater scene here, but I discovered a group of expat actors, the Pattaya Players. It’s a little community theater group that performs at various resorts and restaurants. I hadn’t been an actor for many years, but I auditioned for the one-acts and will be in some of them. I’m thinking of starting a little improv group with the Pattaya Players.

I also thought I’d have to leave behind classical music, which is a major interest of mine. I discovered I was wrong about that, too. There’s a place called Eelswamp on a big estate away from the beach area of Pattaya. The owner invites musicians from around the world to come and perform at a small music conservatory on the estate. I’ve go there and listened to wonderful chamber music.

What about health care? How does that work for you?

I haven’t settled on a solution. Many plans, such as those at the Bangkok-Pattaya Hospital, which is a chain of hospitals similar to Kaiser in the U.S., will not cover people over 65. Several Thai insurance brokers are pitching various types of senior coverage to me. One plan was about $220 a month, which is more than I want to spend.

I become eligible for Medicare next week, but I would have to fly back to the U.S. to use it.

Medical tourism is big here, and there are excellent medical centers. The cost for an operation, for instance, is much less than a similar hospital in the U.S. charges. But that is still expensive for me.

Do you plan to go back to the US?

Inside I’m the same guy I was at 20 but more experienced and, I hope, a little smarter. I want to do the things I want to do, like pursuing my interest in theater. I hope I will always have something that drives me, that keeps me busy and ambitious.

See all our Aging Out of Place features

13 responses to “Aging Out of Place in Jomtien, Thailand”

The votes are in! Join our book club and enjoy the discussion about A Deadly Inside Scoop.