Two months ago, in a piece called “Aging… Disgracefully?” we ran a poll asking you to tell us which word you would use to describe how you want to age – or how you are aging. Our shortlist of adverbs was culled from responses to a question posed on the British-based community site Sixty&Me (we added “fiercely).

Seven hundred and fifty votes later, it’s time to share the results of our search for the best alternative to the sit-down-and-be-quiet term “aging gracefully.”

Leading the pack is “magnificently,” which has a regal ring but literally means “making a splendid appearance or show; of exceptional beauty, size, etc.” Those of you who see getting older as a constant process of branching out into new territory made “Adventurously” a very close second. And passionately trailed in third place. 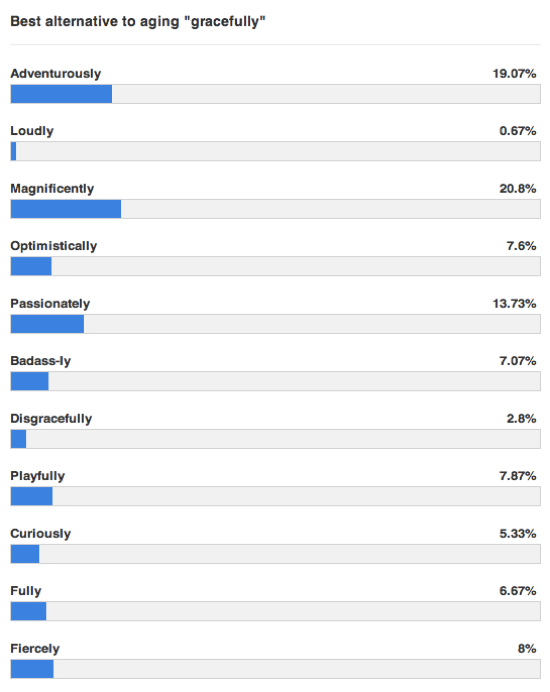 Some people preferred their own terms to the ones we listed and added them in the comments. Among the write-ins were these:

“Genuinely” would be my preference. I chose fiercely but that word to me is somewhat harsh.

If you didn’t take the poll, you can still do so here – or add your preferred word in the comments below.

Read Senior Planet on the search for an alternative to Aging Gracefully.

One response to “Aging… Magnificently!”