Girls have been jumping out of giant cakes for decades, but not a lot of 100-year-olds have had the chance. Helen Krout got the opportunity during a recent bakeoff at her her Pennsylvania retirement community. Garden Spot Village says it likes to offer a surprise during its annual event; this year’s happened to coincide with Krout’s birthday, so… Watch! (And ignore the commentator.)

15-year-old invents device to help people with Alzheimer’s stay safe Kenneth Shinozuka was four when his grandfather first started to develop Alzheimer’s, and as he’s grown, he’s watched one of the people closest to him become less and less able to care for himself. He’s also witnessed his grandfather’s scary wanderings. So the teen set about inventing – and prototyping –  a low-cost sensor embedded in a simple sock detects an increase in pressure and sends an alert to a caregiver’s phone. Shinozuka is testing his invention at a local assisted living facility in Irvine, California. Watch an NBC News report below and also check out theShinozuka’s Google Science Fair presentation on YouTube, where he talks about the first time his invention alerted the family to his grandfather’s wandering. “At that moment,”he says, “I was really struck by the power of technology to change lives.”

Kicking the bucket list  Last week, after attending a NATO summit in Wales, President Obama detoured via Stonehenge and told reporters he was crossing the site off his bucket list. That led Rebecca Meade in the New Yorker to rip apart the whole bucket list conceit – which, she says, turns experiences into commodities on a checklist. Meade proposes instead a set of goals that are “touchstones to be sought out over and over, with our understanding deepening as we draw nearer to death.” Whether or not you’re a bucket lister, read more in “Kicking the Bucket List.”

Ever collided with someone who’s texting while walking? One Chinese city, expressing concern over the dangers to older people and kids from people who text while walking (TXX), has created a special sidewalk lane for texting. One lane is labeled “No cell phones.” The other reads “Cell phones. Walk in this lane at your own risk.” Initial reports say the experiment might have limited success: Texters just don’t notice the signage. Read more on Forbes.com. 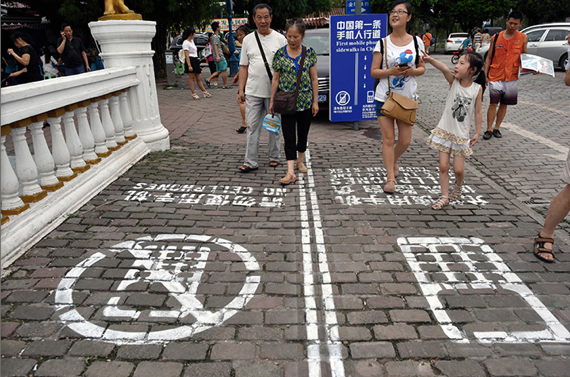 Defining the Boomer era PBS is adding to the Boomer Generation lovefest this week by airing a major new documentary film that features a notable person born each year between 1946 and 1954. “American Masters: The Boomer List” premiers on Tuesday, September 23 at 9pm ET. Among the 19 Boomers interviewed is author Tim O’Brian (below), who talks about the Vietnam War’s impact on his generation. Others on the list include Deepak Chopra, Any Tan and Samuel L. Jackson. Click here to watch the trailer on YouTube.

Have you been following the fight for the “open Internet” – the idea that all web traffic should be treated equally rather than sites that can pay being given a fast lane (read more on Senior Planet)? Was your comment one of the record-breaking 3.7 million on the subject received by the FCC received during its public comment period? With the door on comments now closed, NPR took a look at what the future holds – the when and how, and whether overwhelming public support for an open and neutral Internet will have more sway than the millions of dollars invested by telecoms in their fight for a fast lane. Read more here.

Happy wife = long-lasting marriage, a new study says. But wait, as reported by Tech Times in “If you want a happy marriage, make your wife happy,” the story might actually be more male-centric than the headline suggests. The study surveyed couples married at least 39 years and with at least one spouse age 60-plus. Researchers found that besides general life satisfaction, a big factor in keeping these couples glued together was a wife who felt happy with the union. “When a wife is satisfied with the marriage she tends to do a lot more for her husband, which has a positive effect on his life…” and presto: A happy husband  = a long-lasting marriage. Read more here!

Active Aging Week starts Sunday, September 21. Led by the International Council on Active Aging, the 7-day event prompts local host organizations to offer free and low-cost activities and events as well as online programs and resources. Each day has its own focus, from foot health on Sunday to walking on Monday and intergenerational on Thursday; click here to see online resources for each day.

iOS8 tricks and tips Apple released its new operating system for the iPhone 4s, 5 and 6 – and Wired put together a helpful roundup of 15 new tricks that will make using your phone easier. Our favorite: You no longer have to hold your home button to summon Siri; now you can just say, “Hi Siri.” Click here to read all 15.

Who wants to live past 75? Ezra Klein talked to medical ethicist Ezekiel Emanuel, who caused a stir when he published an essay in The Atlantic about his decision to not live past age 75. His reason: Medical science has extended life, but not vibrant life, and he doesn’t want to fade out. Read the interview and let us know your thoughts in the comments below.