“We’re both mothers, and there’s a bond in that no matter how many years separate us. Let’s start there.”

Hey, Mom in Yoga Pants, I got it. My conversational gambit at this toddler gym class wasn’t what you were looking for. I just thought, “Well, we’re here once a week, and my granddaughter and your son seem to like each other. I didn’t think we’d get coffee afterward or anything—just a little small talk. You gave me a vague little smile as if you didn’t quite hear me. Then your eyes looked past me, searching the room for someone more like you. Someone young.

I’m in charge of my daughter’s children three days a week, and Mom in Yoga Pants is someone I meet all the time, in many iterations. She is just not that interested in me. I’m not sure what it means about me that I keep trying. Lots of times I’ll be talking to a young mom—and I know she doesn’t consciously do this—but her eyes scan down to my stomach. That’s what Mom in Yoga Pants did this morning. When this happens, suddenly it’s me against her.

Mom in Yoga Pants, you may see me as someone who has her share of the belly fat Marie Osmond rails against in TV commercials, but it wasn’t always the case. And if yoga pants had been invented back in my day, I might have looked a whole lot better in mine than you do in yours. Just sayin’.

Why do I feel competitive with Mom in Yoga Pants? I can’t stop myself. And there’s more that spills out:

Hey, Mom in Yoga Pants, I know it’s none of my business, but sometimes I let myself get judgy when you lose focus on the little human you brought to this class. You’re on the phone a lot. Last week I caught your kid as he was falling backward off the trampoline, which you didn’t see because you were discussing—could this be right?—your recipe for aioli.

That’s not to say you’re not being an attentive parent. Just the opposite, in fact, when you’re not on the phone. The Fall of Saigon did not have this many helicopters in one place as when you and your friends get into a competition for Best Mom prize. You zoom in with correction, with instruction and with suggestions that make my head spin. Neil Armstrong walked on the freakin’ moon and never got told “Good job” as much as your kid gets for going down a slide on his butt.

And okay, I’ll admit it. I get downright despondent when the humble-brags begin. I can’t contribute anything (even if anyone were looking in my direction) because not one of my grandchildren has ever built a replica of the Palace at Versailles with Cheerios he painted himself in historically correct colors.

I’m probably not recording this correctly, but this is what I hear: “Oh, he drives me crazy. He’s just so smart I have to keep him insanely busy. Right after this we have our Painting in the Style of the Old Masters class.”  To which the other mom says, “Oh, I know exactly what you mean. My older son taught himself to read at two. I’m just praying that this one doesn’t do that!”

Of course I’m just saying this mean stuff because my feelings are hurt that you don’t want to be pals for the eight-week run of this class. I want to be in on the joke, but I seem to be the odd girl at the eighth-grade lunch table who gets left out.

What if I make this promise? I won’t bore you with stories of the old days. About how I pushed out my first 9lb. 5oz. baby without so much as a Tylenol and then breastfed him on demand for six months, all the while baking my own bread and making macramé plant holders. I won’t pretend to know how different motherhood would have been for me if I’d had a cell phone or Google at hand.

We’re both mothers, and there’s a bond in that no matter how many years separate us. I’ll bet the first time you saw your baby, you cried out in pure joy and then jumped right on the crazy roller-coaster ride they call being a mom.

Me, too. Let’s start there.

One last thing: I didn’t mean what I said about how you look in yoga pants. You look just fine. 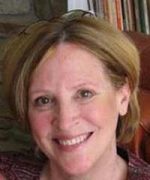 3 responses to “A Message for the Mom in Yoga Pants”