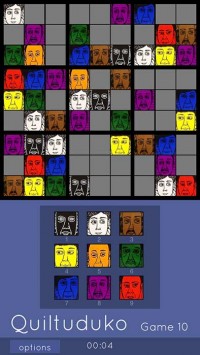 Sudoku, the numbers puzzle that became the world’s favorite brain teaser in the ‘90s, has been touted as a way to slow down the cognitive losses of aging. Playing the game and regularly cracking its arithmetic logic, some have said, keeps the mind active. The objective is to keep Alzheimer’s at bay while having fun.

Now, one of Sudoku’s millions of admirers, Faith Ringgold, has turned a brain teaser into a digital work of art – and who better to do so given her stature as an artist whose primary medium is quiltmaking? Sudoku’s rows of single-digit numbers, arranged in nine-by-nine grids, bear more than a passing resemblance to quilts.

Ringgold, 84, is a painter, mixed-media sculptor, author and educator whose work is in the collections of major museums: the Met, the Guggenheim, MoMA, Philadelphia Museum of Art and many more (her work is also part of the MTA’s Art in Public Spaces at Lennox and 125th St.). Ringgold made her name in the ’60s and ’70s with political paintings, but many know her best for her storytelling quilts – textile pieces that weave narratives of her heritage as a Harlem native, African-American and sometime activist into vibrant, emotionally charged works.

Recently, Ringgold has taken Sudoku’s similarities with her artwork a step further by creating Quiltuduko, a new app that constitutes a bold move in the world of Sudoku. Described on her Facebook page as “an art-making game,” Quiltuduko replaces the game’s customary numbers with drawings in color and black-and-white – everything from geometric patterns and nature imagery to seemingly random squiggles and drawings of human faces.

In Quiltuduko, the regular rules apply – but when you complete one of Ringgold’s Quiltuduko puzzles, you find that you’ve created an artwork. In addition to the brain workout, each game now also comes with an aesthetic payoff.

Ringgold’s first 50 Quiltuduko games rolled out in iTunes in September. You can view the imagery on Ringgold’s blog, which also features posters of finished games.

Ringgold spoke with Senior Planet via Skype from her home studio in New Jersey about her obsession with the game and her life with digital technology.

How long have you been playing Sudoku?

About five or so years now. I think I came across it in a magazine or something in a doctor’s office. I remember thinking, ‘Hmmm, what’s this?’ Before that I had no idea how popular it was, but I got hooked right away. Suddenly it seemed as if Sudoku games were everywhere.

What was it that excited you about the game?

Well, I’m 84 now, so that was when I was just hitting my eighties. I’ve heard people describe the game as “tricky”; at this stage in my life I think tricky’s good for me. I want to keep my brain active. But there was also something about the number of nines that spoke to me: nine rows and nine columns with nine different numbers placed in nine boxes. It’s amazing that you can have so many numbers in a row without repeating.

Well, I got so obsessed with the games that I started saving them, but once you’re done with them, all these grids of numbers aren’t much to look at. They’re disposable. As a visual person, that frustrated me. I mean, there were some games that had colors, but that was just background for the numbers. I thought, Why not just create my own nine images to correspond to the numbers? That seemed simple enough to do, and it lends itself to the same number of challenging permutations. I got to work and created the first 50 designs. That was about three years ago.

It took quite a while to find a developer who could translate it to the Internet. The first people who were being sent my way didn’t truly understand the concept. That’s still surprising to me because the idea seems so natural that I still can’t believe no one else has thought of it.

Finally, about a year so ago a woman I met at the College Of New Jersey introduced me to the developer Ed Kim, who was on the faculty at that time. He got it right away, and with help from some of his students did a beautiful job. Through iTunes we’re on the Apple platform, but he’s currently readying it for Android.

You can play the games via the app and/or visit the site, where we also offer 40” X 32” posters of the designs.

Did any aspects of the digital process surprise you?

No, I can’t really say they did, but then I’ve been working with computers for quite some time. I think I bought my first one in the late ’70s. I began using computers because it made documenting and archiving my work so much easier. My MFA is from City College, but believe it or not, at one point I actually contemplated going for a doctorate in computer science.

Right now, there are only 50 designs, as I said, but I have hundreds more ready to go – there’s one design on the back burner based on President Obama’s facial expressions. I’d love to get that one out.

Some of your work is heritage-based. Do any of the Quiltuduko designs use images from earlier quilts?

The imagery is all new and done specifically for Quiltuduko, but just like my other work, some of the designs are inspired by African art — masks and other things.

Last question: What does aging with attitude mean to you?

It means that you allow each decade of your life to be meaningful. Sure, there may be physical things that at this stage of my life I can’t do, but there are other things, like my Quiltuduko. And I really hope it can in some way enhance the lives of others my age. I’m really excited about it.

Quiltuduko is available for iPad and iPhone in the App Store ($1.99). An Android version is in the works. Stay tuned by visiting Faith Ringgold’s Quiltoduko blog, where you can also play the game on a computer and purchase artwork.