By Senior Planet Sunday, April 5 No Comments Share This:

Teens re-create old photos with the seniors in their lives

How do you get kids and seniors to interact in a way that’s fun and interesting for both generations and that combats ageism? The teen social-good site DoSomething.org had a smart idea: Ask the kids to pick an older person in their life, work with them to re-create a photo from their youth (which of course means looking through photo albums together) and then post that photo to a social sharing site like Instagram. Last week, the site published some of the resulting gems, including this one: 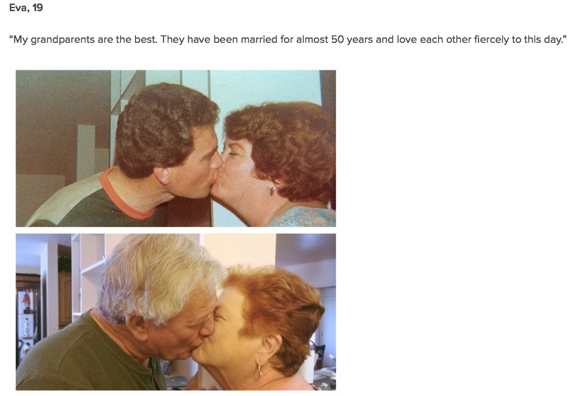 “My grandparents are the best. They have been married for almost 50 years and love each other fiercely to this day.” – Eva, 19

See more photo re-creations from the Past Picture Perfect campaign. And read more bout the campaign here – it’s not too late to pair up with a kid and try it.

92-year-old game-changing inventor says he has one idea left (a big one!)

You might not have heard of John Goodenough – inventors often get short shrift. To those in the know, Goodenough is the inventor – in 1980 at age 57 – of the lithium-ion battery, which in turn brought us smaller and portable technology. Now 92, Goodenough was the subject of a story on qz.com. The physicist, it seems, still “goes to his smallish office every day at the University of Texas at Austin. That, he says, is because he’s not finished.” His goal? Invent a super-battery for electric cars that will let them compete price-wise with gas guzzlers. Without this new technology, he believes the world will soon be warring for the last reserves of oil and we’ll all be suffering the effects of climate change. “I’m only 92,” he says. “I still have time to go.” Read more here and listen to Goodenough (and a whole of tech talk about batteries) below.

Scientists uncover the cause of Alzheimer’s

A true scientific breakthrough, this week. After studying more than 3,5000 donated brains, scientists believe they have enough evidence pointing to a specific protein, tau as the major driver behind the cognitive decline of Alzheimer’s Disease. While tau was always a suspect, most of the research focus has been on amyloid, (another dysfunctional protein that builds up as the condition progresses of the disease). While the new finding doesn’t end the debate over which protein is the biggest contributor, it does have implications for future research. The authors of study author, which was published in the journal Brain, auggest that therapeutics should now focus on tackling tau, rather than amyloid. To read more, click here.

Colleges of the future: senior-friendly

Not planning to sit back and enjoy quieter times in your retirement? Nor are many other seniors. Three of every five working retirees told researchers that retirement was their opportunity to start a whole new career, while others had to acquire new skills after a job loss left them prematurely retired. Not surprising, then, that the number of older students retraining for those careers is growing steadily – among those who can afford to go back to school. In March, leaders from 22 institutions of higher learning convened in NYC to discuss how they can come together to create the college programs of the future: intergenerational, senior-friendly and affordable. Read more at the New York Times and check out our article about free school for seniors here.

Drive around the U.S. hitting 50 states

Algorithms are sets of rules that enable computers to offer users like you recommendations for what to read and what to buy – they also can be used to solve problems, like how to drive around the country hitting all 50 states and most major landmarks. One enterprising techie created an algorithm just for that, mapping the route in such a way that you can start where you live and complete the route in about two or three months, with stops at each landmark, including National Natural Landmarks, National Historic Sites, National Parks and National Monuments (don’t forget: Seniors get a great deal on entry to all national parks, monuments and so on). Click here to see a large version of the map and here to read more. 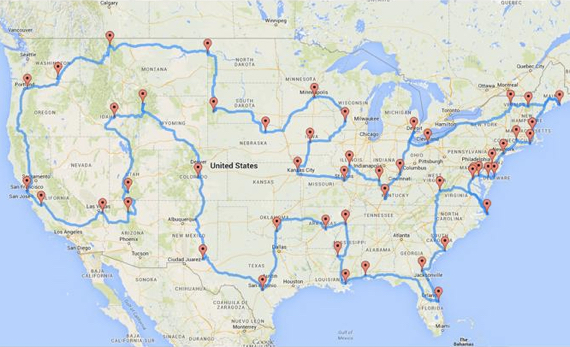 7 tips for getting hired after age 50

If you’ve lost your job, you know how hard it is to land another one when you’re older. U.S. News & World Report tackles the issue with a series of tips for job seekers age 55-plus sourced from experts, including “Demonstrate your fluency with technology.” Read all the tips here.

It’s been a very busy week for Amazon…

You can buy everything imaginable (well, within reason) on Amazon – even a plumber. Last week, the online-shopping giant launched Home Services, which connects customers with professionals offering help with an enormous range of tasks – from installing a garbage disposal to goat herding. To read more click here. Amazon was also in the news for its new Dash Button, a gadget the size of a little thumb drive that you can stick on any product in your home that you re-order frequently – like paper towel. The button will alert you when you’re running low and will automatically place an oder, so you never run out. Welcome to the future. To read more, click here.

Quote of the week

She’s only 45, but like Madonna, Kate Blanchett is talking about ageism – last week in an interview with Australian Vogue, where she talked about the importance of older female audience. Here’s what she said:

Read more about the interview here.

“Birthdays are good for you. Statistics show that people who have the most, live the longest.”

Did you see our roundup of April Fool’s Day videos and Internet experiences? (No? Click here!)  Here’s one we missed – it might be your favorite. Enjoy!

Open Thread: Back to Normal Yet?

Give us a 'field report" of the conditions where you live. What's open now? What's still closed? What are you most glad to see return?
Open Thread