“Age-integrating the struggles ahead means coming to grips with our own internalized ageism, the voices that whisper “too old” or “too young,” that make us complicit in our own marginalization. Only when each of us rejects this culture’s ageist script can we play the roles for which we were born—and we were all born for this time..”

I wake these days remembering that something awful has happened. Reality assembles itself, and I feel worse. The multicultural, egalitarian, globalized society I hope to inhabit is under assault. Bigotry is ascendant. Racism, sexism, homophobia, religious intolerance—pick your prejudice!—are sanctioned, even celebrated. How do we respond to attacks on those most vulnerable? How does the mission to build a movement against ageism fit into this historical moment?

Until I thought hard about it, just posing that last question felt self-indulgent. Why insist on adding another “ism” to the list when so many higher-profile forms of discrimination, racism in particular, need our bandwidth? Should ageism move to the back of the line, at least until Medicare is in the crosshairs?

Here’s the thing: we don’t have to choose. It’s not a competition. And it’s not zero sum. All forms of discrimination intersect with and compound one another. The flipside is that when we make a community a better place in which to be from somewhere else, worship a different god, have a disability or be non-white or non-rich, we also make it a better place in which to grow old.

Ageism is the perfect target for collective advocacy because it affects everyone. Its universal nature means that we undermine ageism when people of all ages show up for stuff. It’s that basic. The vital task for each of us—youngers and olders alike—is to join whatever struggle matters most to us in the days ahead. Stand up and step out—into the community, the classroom, the courts, the town squares.

Age-integrating the struggles ahead means coming to grips with our own internalized ageism, the voices that whisper “too old” or “too young,” that make us complicit in our own marginalization. At times there may be good reasons to sit tight, but age alone is not one of them. Only when each of us rejects this culture’s ageist script can we play the roles for which we were born—and we were all born for this time.

Every stage of life has its strengths, from physical resilience to historical perspective, so we are strongest when we collaborate. If everyone in a group is the same age, whether 17 or 70 and whether it’s focused on carbon emissions or hate speech, it will be less creative and less effective. We are stronger together in the streets as well. Many olders are more vulnerable physically, but less likely to be victims of violence or seen as threats. Let’s share the risk.

Standing together—whether in front of a mosque or a clinic or an encampment or a bank—undermines age stereotypes and builds solidarity. We are all old or future old, and joining forces across our years offers a unifying cause in these divided times. We add ageism to the list of “isms” that we will not tolerate—implicitly, because all ages show up, and explicitly, because we insist upon it. Dismantling ageism changes from aspirational goal to certain outcome. We move organically toward a society where young and old, gay and straight, black and white, rich and poor all have a voice and a path. We have no other option, because we’re going to need all hands on deck—and because the possibility for radical social change has never been greater.

This article was first published as “The current moment: what’s ageism got to do with it?” on Ashton Applewhite’s blog This Chair Rocks 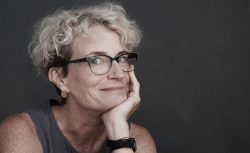 Ashton Applewhite is a journalist, anti-ageism activist and the author of “This Chair Chair Rocks: A Manifesto Against Ageism.” She speaks frequently about ageism and is a Next Avenue Influencer of the Year for 2016.

2 responses to “This Moment in History: What’s Ageism Got to Do with It?”