“Boomers had an outsize influence in our youth — we reinvented youth culture, and now it’s come back to bite us in the ass.” 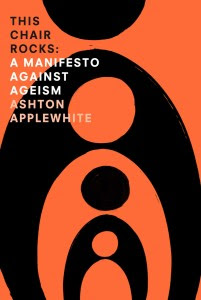 Once in a generation a book comes along that changes the way we think about ourselves and the culture that’s shaping our lives. In the 60s that book was Betty Freidan’s “The Feminine Mystique.” It put into words “the problem that has no name” — the malaise that millions of suburban women were feeling as they polished their kitchen floors, conforming to expectations that doing so was their ultimate fulfillment. In questioning that paradigm, Friedan revealed the personal and political underpinnings of sexism that became central to the feminist critique.

Now comes “This Chair Rocks: A Manifesto Against Ageism,” which might be the book that catapults the dialogue around ageism to center stage. An unexpected bestseller on Amazon, “This Chair Rocks” is by journalist and activist Ashton Applewhite, who self-published the book after a tepid response from editors at mainstream publishing houses. (Applewhite suspects the response was due to perceived “age cooties”; Friedan, too, had trouble publishing her work.)

Applewhite’s thesis — which she presents with plenty of humor and a fine weave of intimate insight and big perspective — is that from childhood on we’re barraged by messages telling us that it’s sad to be old. Her book digs down to the roots of ageism and our own age denial, and examines how ageist myths and stereotypes cripple us physically and psychologically in the workplace and the bedroom. Applewhite exposes the cost of the all-American myth of independence and critiques the portrayal of older people as burdens to society. And she describes what an age-friendly world would look like, concluding with a rousing call to action.

We caught up with Applewhite by phone.

To what extent is ageism a women’s issue? How is today’s struggle against ageism just the next step in the feminist struggle of the ’60s and ’70s?

I am a card carrying feminist — I have a place on Phyllis Schafly’s enemies list — and I think there is tremendous overlap and an enormous analogy between the women’s movement and the anti-ageism movement.

Consciousness raising was the process through which women compared notes and came to realize that what they’d come to see as a personal problem was a political problem that required collective action. It’s the same with aging — it’s not changing until we work together to change it. We need to raise consciousness through the same process that the women’s movement used — small groups talking about ageism. I’ve written a guide to starting a consciousness-raising group around aging. It’s called, “who me, ageist?” We’ve grown up with a lifetime of messages that old people are useless, so instead of thinking about the way we’re not ageist, we should think about the ways we are, the ways we have internalized ageism.

Changing the culture is hard to do, but there is hope. It has changed for homosexuals and women.

What is it about our society that reinforces ageism?

It’s hugely reinforced by American society’s stress on independence, the go-it-alone mentality. When we’re demoralized or afraid of getting old, we think we should eat more kale, save more money, do more exercise, as if the problem was ours alone. Instead, we could be looking at the entrenched discrimination that isolates us and leaves us without support.

You use the word “olders” — tell us about that.

I like “olders” and “youngers.” Everyone is older or younger than someone else. “Older” is value-neutral — I don’t think age alone bestows value. “Elder” or “senior” implies hierarchy, whereas “olders” is a bridge. We grow more variable as we age. Brains and bodies age at different rates.

Yes, it does affect women more than men because of what Susan Sontag called the double standard of aging. Women depreciate while men grow more distinguished. Women experience ageism sooner and more cruelly, but we can also be our own worst enemy by being so judgmental of ourselves and each other.

Because we are judged harshly on looks — and to look older is to look “bad” — we go to great lengths to disguise our age. I understand and acknowledge why women dye their hair and get facelifts — these are really effective ways to not become invisible. But bottom line, it’s like a person of color trying to pass. It’s not good for your self-esteem and it doesn’t do anything to change social problems. By trying to look younger, we’re acknowledging that our older self has less value than our younger self.

I make an analogy to the body acceptance movement. We need to learn to accept ourselves as we are. Social norms are powerful, but the best guarantor of whether you have a good time is how you feel about how you look — that’s what you’re going to project.

Who suffers the most from ageism?

Women whose self-esteem is irrevocably linked to looking and behaving young. But the topic is double edged. Only you should get to say when you will let go of trying to look young. It may be a victory or a defeat, depending on your attitude. I think that denial is a really effective strategy and it works for a long time — until it doesn’t.

If looking good is one of your goals, if there’s self-love in it, great. But I appreciate the older women who speak about being liberated from male gaze. Some women feel they aren’t hostage anymore to what people think or they just don’t give a damn. It’s all what you choose. If you want to hang up your toe shoes and stop trying it’s up to you. I do think it’s important to say how old you are and question any fixed meaning you attach to that number.

Do you think women should stop dyeing their hair?  Why do you do the opposite — dye your own hair gray?

My hair is still brown, but I dye it gray to fit in as an older.

I don’t want to tell women what to do, but I had an aha moment recently when I went to a matinee, which are mostly attended by older people, and saw only one woman with a gray head. It occurred to me that this is one way we collude in being invisible — by dying our hair. We should have a year of all of us letting our hair go gray to see how many we are. To the women who just do it because it’s expected, imagine if we could pass off that tyranny en masse.

Ageism is unique in that it’s universal, so men do eventually experience it. For white men it can be their first experience of discrimination, and it usually happens first in the workplace. It’s often a shock. The point is that all of us need to mobilize against discrimination on basis of age.

What can we do to confront ageism in everyday life?

The critical first step is to look at our own attitudes about aging and the paradigm of successful aging. As long as you eat enough fish oil you can put old on hold… we need to look at where these attitudes come from. There are powerful interest framing aging as a medical problem that can be cured or a cosmetic problem that can be fixed. But aging is not a disease, it can’t be fixed.

There’s so much focus on “successful” aging. All aging is successful — otherwise you’re dead. To model how successful we are by how closely we resemble our younger self is false consciousness. It’s the tyranny of “still” — as long as we’re still dating younger women or still running up the stairs, we’re not old — but we cannot succeed at that. Even though we all want to keep doing the things we love doing, the goalposts shift, and sooner or later we can’t do those things. My hunch is that as Boomers push into our 70s, we’ll recognize that, accept that we’re older and refuse to be sidelined.

It’s an “ism,” like racism, sexism and homophobia. All “isms” exist to protect the status quo. They’re about what people in power want. They allow those at the top to pit the rest of us against each other. Poor whites against poor blacks, stay-at-home moms against moms in the work force, young workers against older workers. Those struggles enable the status quo to stay in power by getting us to blame each other for inequality instead of putting the blame where it should belong.

You talk about a link between ageism and health…

There is a close link between attitudes towards aging and mental and physical wellbeing. Studies show that people who have positive attitudes towards aging walk faster, have better handwriting, recover more completely from illnesses and live longer. We should have an anti-ageism campaign as a public health initiative. Having a purpose in life gives you a positive attitude, and people who have a purpose — whether they want to succeed at bridge or end ageism — are enjoying life to best of their abilities.

How does the fact that one day all (or most) of us will be old make ageism different than, say feminism or racism?

Ageism affects everyone. When we’re ageist at whatever age, we’re discriminating against our future selves. Age confers experience and is a rich process of accretion. Not dealing with aging is not dealing with reality.

But there are issues that don’t exist for other “isms,” such as health insurance exclusions. Medicare doesn’t cover glasses, dental care or hearing aids. If we can’t see, hear, eat or speak properly, how can we function?

And the language of ageism is unique. There are the words like “still” (as in “she’s still driving at 90”) plus words like “feisty” etc., that suggest a strong older person is viewed in a different way than a strong younger person. People use these words without thinking — possibly because life expectancy has increased so rapidly, we haven’t caught up to the fact that it’s no longer so unusual for an 80-year old to be driving or a 70-year old to be running?

How is the Boomer generation changing the perception of age and ageism?

The Boomer generation is getting old and refusing to relinquish citizenship in the world. We’re already pushing back against all the stereotypes that characterized former generations of olders. Boomers had an outsize influence in our youth — we reinvented youth culture, and now it’s come back to bite us in the ass; we’re spoiled and we don’t want to cede that influence to the younger generation. And a lot of us are bumping into the fact that 60 is different from what it was a generation ago. On other hand, you’re still going get old.

Commenters on Amazon say they’re ready to join a movement — how about you?

7 responses to “Q&A: Ashton Applewhite on Why We Must Mobilize Against Ageism”