The Fun of Stilt-Dancing in Your 70s

Sarah Stephenson was in her late 60s when she saw stilt dancers performing in a local All Souls procession and decided that it looked like the kind of fun she wanted to have. So she started practicing. Today, you can see her participating in local parades and perfecting her stunts in the park. Next up for Sarah: Learn the unicycle.

“I don’t think that age should dictate what you wear and how you can wear it. I think it depends on the person.” — Iris Apfel in a new FT video

“In a blink of an eye, I find I’m in my 80s, but here I am. If I’d known I’d live this long, I would have taken better care of myself.” — Beverlye Hyman Fead, quoted by the Alliance for Aging Research

Global Hundreds of artists are posting images for Brussels on Instagram

And thousands of people are sharing their art. To see a selection of art posted in the wake of the suicide bombings on Tuesday, see Tech Insider 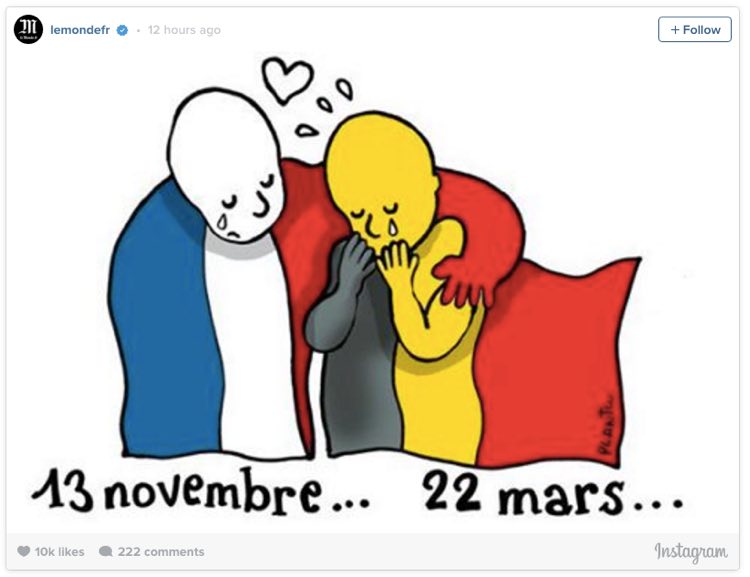 You can find treasures on YouTube. Here’s a Finnish news team’s tongue-in-cheek look at the US presidential race. (Via Funny or Die)

Brain health Exercise and the brain: What’s the real deal?

You’ve probably read reports online and in magazines about the link between exercise and cognitive health — but what typeof exercise and how much, and how reliable are the studies? A new website Stat, which reports on health science and policy, has dived into the topic and come up with a mixed report: Yes, there’s some inconsistent evidence that exercise can preserve certain types of cognitive functioning;  a lot is no better than a little; and moderate to intensive — such as brisk walking — may yield modest results. Read the analysis at Stat, and browse the rest of this excellent site, too.

People At 95, this jazzman is back at the piano — dementia notwithstanding

He played in a jazz band for some 40 years before dementia forced him to move into a care facility and he lost touch with his band members. Now Edward Hardy is back at the piano and reunited with members of his former quartet after staff at his UK nursing home helped him place an online ad for musicians to come and play with him. More than 80 responses later, here’s Hardy — “Alive Inside.” As that award-winning film showed, there’s nothing like a familiar tune to reawaken the spirit and reminiscences of memory patients. Read more at Next Avenue

Ageism How to counter ageism at the doctor’s office

“In every part of life, including health care, it pays to speak up when you encounter ageism and to proactively counter it. From the get-go, tell your doctors: “My health goals are just as robust as they were 20 years ago. I expect you to aim for a high level of results.” That’s part of a response by doctors Michael Roizen and Mehmet Oz to a question posed by a man who felt his hand surgeon had made certain assumptions about how much function he might need in his hand, based on his age. The docs point our that negative views of age, which we easily internalize when they’re at us, have all kinds of negative health consequences, and it’s worth learning to speak up and set the record straight. Read more of what they have to say at the Idaho Statesman. Also read Senior Planet’s article “Is It Time to Fire Your Doctor?“

Quiz Researchers claim they can calculate your age based on your apps — do you fit the bill?

This may not be the most cutting edge scientific research out there, but it’s intriguing nonetheless: After cross-referencing the app usage and demographics of more than 3,700 people, researchers created an algorithm that let them predict with a high degree of accuracy a user’s gender, age, marital status and income. Curious? Read more at the Washington Post and take the quiz to see if the model holds up for you

Karl Philomer was a gerontologist for years when he realized that he had spent all his time parsing data and reading reports rather than actually spending time with older people. So he ventured out and started listening. In a beautiful piece in The Week, he writes about what he learned about life, and what young people want to learn about life’s big questions from those much older than themselves. His takeaway: However old you are, there are people older than you who can help you to find your way forward. (And if you’re already  Read it in The Week

Coloring books for grown-ups are hip right now— adults are discovering the meditative benefits of coloring inside the lines. The next frontier is digital coloring books for grownups. Blogger Digidame,  who happens to be a senior with decades of experience in the technology industry, has been trying these out and finding that when something’s bothering her, coloring in a pattern on her phone or tablet can help. Read more in her post “Forget Your Troubles, Come On Get Happy” and check out the video for  Colorfy — Digidame’s coloring app of choice — below.

Travel How to use Google’s new vacation planner

Marrying its enormous database to Google Maps, the company has come up with a first of its kind planner called Destinations on Google. By using the term “destinations” plus country in a Google mobile search, you can pull up itinreraries for the most popular cities, cheapest months to travel and more, and also book directly within Google. It’s not perfect, but it’s fast and easy and saves you from having to look for information on a bunch of different websites. Travel & Leisure has a how-to walkthrough of the new feature

That’s according to a report in Fusion, which asked a statistician to calculate the point at which dead users will outnumber the living on Facebook. Families of Facebook users who pass away are allowed to turn their loved ones’ profiles into “memorial walls”; based on projections of global deaths over the next few decades, the fact that the network’s overwhelmingly young user base will inevitably age, and a speculative assumption that the number of people joining Facebook will plateau over the years, memorials will become more numerous than profiles of actual living people during the 2090s, according to this estimate. There goes Facebook! Read it at Fusion

Even if you are living in New York City, navigating free Friday evenings at the Museum of Modern Art or paying full price can be painful — so it’s a big deal for all that MoMA has uploaded images of a hoard of its paintings, drawings, photographs and videos to its website. You can sort by time period, artist, medium and artwork title to find what you;re looking for, or just browse. Detailed views include information on where in the museum you can view the work. Take a look on the MoMA site