Living a predictable life would be slow torture for Larry Pitman, 74, an American living in an oceanside district of Lima, Peru called Barranco. Larry prefers the “not knowing” that change brings – and that’s what’s kept him moving through a variety of careers and from place to place. Nearly 10 years ago, he made the biggest leap – to this artsy Peruvian neighborhood known as “The Bohemian District.” Barranco was recently named one of the 26 hippest neighborhoods in the world by the travel site Trove.com; it’s also home to older cultural luminaries such as novelist Mario Vargas Llosa.

When Larry thought of moving abroad, South America had always been an obvious choice; he had been in the Peace Corp in Bolivia and liked living in South America. Later, he married a Peruvian woman, a pediatric dietician who was offered the chance to start an academic program in Lima. When a large publishing company offered to buy the newspaper that Larry founded, the die was cast. He would soon be turning 65, so it was time to think about retirement or as it is called in Peru, jubilacion. Larry cites Chilean writer Isabel Allende, who said jubilacion is the time to celebrate the end of work and begin a different life.

Although Larry did start a different life, after about six months of jubilacion, he found himself gradually returning to a working life. Today he teaches business English at the Universidad del Pacifico, writes for the English language paper Peru This Week, posts readings on Soundcloud of his stories about living as an expat and last year published a collection of essays, Dogs of Barranco: Stories of a Retired American Expatriate in Peru.

We spoke to Larry at his home in Barranco by Skype. 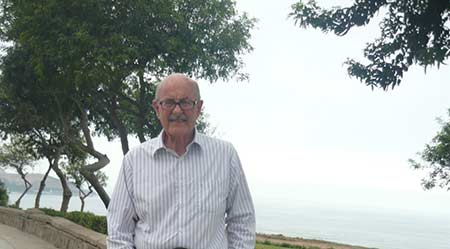 What is the best thing about living in Barranco?

Barranco is a charming neighborhood that reminds me of the North Beach neighborhood in San Francisco. It’s home to writers and artists, so it’s possible to have a rich cultural life just a few blocks from the beach. And the restaurants serving local cuisine are excellent and reasonable. I also appreciate the importance people give to relationships. You have friendships with people of all sorts of backgrounds. And like many South American cultures, relationships with family are extremely important.

What’s been the most difficult challenge of living in Barranco?

Learning the language. There are Americans here who don’t speak Spanish, and they’re doing fine, but I think that if you’re living in a foreign country, it’s important to try and learn the language in order to take advantage of the full experience of being there. I knew some Spanish from my time in Bolivia, but I had to do a lot of hard work to achieve a functional level. Older people may think they can’t do it, but they can. It just takes motivation and persistence. You’re never going to speak like a native, but you can learn enough to communicate well.

You said you were ready for the rich social life that retirement can offer. Has it been easy to meet people in Barranco?

The best way to get to know the people in your neighborhood is to walk a dog – and we have two English sheepdogs.

What do you do about health care?

I gave up Medicare and I buy insurance privately in Peru. For about $200 a month, I have a 10 percent deductible health policy that includes medication at a discount of as much as 80 percent. This is a “Cadillac” policy. As a resident, you can get less expensive health insurance through Peru’s National Health Plan, which is about $20 a month for an individual. One expectation I had before moving here was that health care would be better, and it is. I see a physician who is terrific diagnostician. It’s not unusual for him to spend an hour talking with me. He then refers me to the right specialist for treatment. The cost of my visit is $28. I had a hip replacement three months ago for about a third the cost of having it in the U.S., and the care was excellent.

What would you say is the main advantage of “aging out of place”?

It’s extremely invigorating to make a dramatic change in your life. If you retire and you stay in the same place, you tend to live a similar style of life. You do the same things, go to the same places and eat the same stuff. You assume you know everything. Moving to a foreign country is a kind of shock treatment. For me, doing something completely different is a healthy thing to do. I never stop learning, and I found the challenges to be invigorating.

And what about “aging with attitude”?

At our age we don’t need to turn our backs on challenges. We can embrace them.

2 responses to “Aging Out of Place in Barranco, Peru”