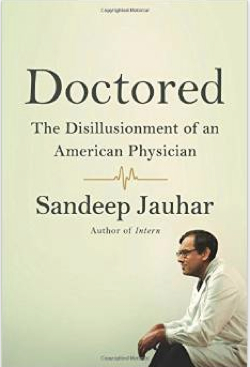 You’d think cardiologists would be happy enough with their lives. According to recent salary surveys, they rake in, on average, $350K a year and some make much more.

This gloomy mood is captured in cardiologist Sandeep Jauhar’s new memoir, “Doctored: The Disillusionment of an American Physician.” The book points to the causes of Dr. Jauhar’s personal and professional despair; Jauhar describes it as a “manifesto for reform.”

In the new book (the author’s 2007 memoir, “Intern: A Doctor’s Initiation,” was widely acclaimed),  Jauhar describes how cronyism is at the root of many doctors’ patient referrals, how unnecessary tests are ordered to generate income, how corporate ties (including his own, for a time) may distort decisions and how the system has become specialist-heavy – often with no clear answer about what’s wrong with the patient despite a team of experts.

Other problems include burgeoning paperwork that detracts from patient care and reimbursement cuts leading to over-scheduled doctors who have little time to spend with their patients.

Of course these problems affects patients as well as doctors, especially older people, who tend to have more medical problems, are more likely to have chronic diseases and eventually may need to make life-and-death decisions. Jauhar tells stories of terminally ill patients lobbying in vain to forgo treatment and specialists ordering invasive and expensive procedures unnecessarily.

The story of James Irey is a case in point. Irey was an immigrant from Trinidad, in his late 50s, with congestive heart failure due to a disease that affected his heart and his lungs. The doctors, including Jauhar, recommended a heart-lung transplant as his only hope. He was opposed, thinking he should just enjoy what little time he might have left, but the doctors pushed him to reconsider.  Before getting on the transplant list, he needed to have a catheterization. He was still reluctant, but Jauhar influenced him. On the operating table, Irey had a heart attack. A few days later, he died. The story is in the chapter titled “Good Intentions.” Jauhar says, “It still sometimes amazes me how much power we have to affect patients’  lives, for better or for worse.”

Senior Planet caught up with Jauhar by phone while he was in the middle of a busy workday as director of the Heart Failure Program at Long Island Jewish Medical Center.

You paint a grim picture of health care in America. Can you explain why it’s grim, especially for older patients?

The system is good at managing a single acute problem, such as a stroke, something that requires a high technology intervention. But when you are dealing with chronic illness that requires input from many doctors, the system is totally fragmented. When a condition requires multiple doctors’ input, the system – and the care you receive is really very weak and very often fails patients. The specialists tend to interpret problems through their own expertise and they don’t always confer with one another. Nothing beats just picking up the phone and talking to someone.

How can older adults, in particular, improve their care, given the system we have?

I think it’s important to find a good primary care physician. That person can be the driver of your health care. I still have patients come in who have six doctors [specialists] but no primary care doctor. The doctors don’t confer and you end up with fragmented care.

You need someone who can put on the brakes. A primary care doctor can sift through all the recommendations.

How can we  recognize when we need to change doctors or make some other changes because our health care needs are not being met?

It’s hard to know for sure, but trust your instincts. If you feel like you are being rushed, for instance, something is not working.

What are some ways we can improve our medical care and our relationships with our doctors?

I think it’s important to read up on your illness, so that you are informed.

When you go to your doctor, be very direct in giving your history. Sometimes it is helpful to say, ‘Doctor, I know you are busy, but give me two or three minutes to tell you what’s going on so I can get it out.’ Often a doctor will interrupt a patient in 10 or 15 seconds and redirect the history to something else, so a patient is not heard. Prepare before you go in, so you give all the important points.

How can we get involved in health care reform? What’s a good starting point?

There are powerful advocacy organizations for the elderly. That is one way.

Sending a letter to your congressman sounds a little conventional, but individual letters can often help.

As for what to ask for, I think the single most important thing we can do is increase pay for primary care doctors so there are enough of them for aging boomers. There will be a huge increase in the elderly population. At the same time, all these doctors 60-plus are going to be retiring. We need more primary care physicians who understand the unique needs of the elderly, more geriatricians. The elderly don’t need 20 different medications. Sometimes the best thing is to prune down the drug regimens. We need physicians who are aware of the drug-drug interactions, who can keep drug regimens manageable, safe and affordable.

We also have to give doctors more time for patients, and we have to allow doctors to practice with a little more autonomy so they are happier and their patients can get better care.

Read the first chapter of “Doctored” on Amazon.

5 responses to “Doctored: A Cardiologist Exposes the Health Care System That Fails Us”