You‘ve seen the headlines. “Easy Stretches To Do At Work.” “Copy Machine Calisthenics!” “Ten Stress-defying Exercises You Can Secretly Perform at Your Desk.”

Does anybody actually do these?

Imagine “Mad Men’s” Don Draper telling his creative team, “Just give me a minute to twist myself into a pretzel!” Or “The Good Wife’s” Alicia Florrick demolishing a witness with skillful cross-examination while performing a series of core-strengthening stretches.

I get plenty of exercise at the library where I work— rolling my eyes, shrugging my shoulders and dodging bullshit.

But as my 60th birthday approached, I decided to up my game and experiment with becoming a Workplace Exerciser.

First up? Stealth exercises!  The invisible moves that nobody else knows you’re doing. For instance? The Gluteal Squeeze. “Contract your butt muscles. Relax. Contract. Relax.“

I easily got into the habit of clenching my tushie muscles while standing behind the library‘s circulation desk.

Once I’d mastered that? “Go toe to head,” one article suggested, “contracting each and every muscle along the way.“

Finally – something to do when a patron insists on giving me a blow-by-blow account of the plot of “Blossom Street Brides.”

“So Lauren calls off their engagement…. but that turns out to be okay,  because then she meets her best friend’s husband’s best friend… and he’s a total hottie! But…“

Once, this would have driven me mad with impatience. Now I just smile and clench.

And unclench. And clench.

I’m not getting bored to tears. I’m getting stronger!

Another terrific stealth exercise? Stand on one leg, then arch and point your other foot. This one is ideal for hearing out a patron’s song-and-dance about why she shouldn’t have to pony up for returning “The Seven Habits of Highly Effective People” three months late.

As she’s talking, I just channel our Yorkie-poo and perform a head tilt or two. It may look as if I’m listening sympathetically, but I‘m actually just stretching my neck muscles.

Do our patrons notice me stretching and shrugging behind the circ desk as they browse? Of course!  But if they ask, I only have to say two magic words:  “Carpel tunnel.”

Because I have a well-earned reputation for being a little quirky, my co-workers take my bending and twisting in stride. One even turns out to be a former Yoga instructor. When I attempted a Wall Squat during a quiet afternoon shift, Eileen proceeded to lead me though a series of more challenging poses and stretches.

How did our patrons respond when they approached the circ desk to find two AARP-aged librarians balanced like cranes on one leg, arms outstretched?

Some of the recommended exercises I read about seem a bit over the top, even for me.

Shadow boxing. “Plant your feet shoulder-width apart and start aggressively punching the air.“ Really? Not this librarian. Although it might be an interesting move to try the next time I tell someone their card has expired and they go ballistic.

“Replace your office chair with an exercise ball.”

Not going to happen.

But using my water bottle as a hand weight and doing a few curls before taking my first sip? Why not?

After a few weeks, I’d settled into an at-work exercise routine that ranged from the invisible to the pleasantly ridiculous.

And after a month? I do feel more relaxed. And I’m carrying less tension in my body. Better yet, I’ve added to the arsenal of things I can do to amuse myself when life gets dull.

And God knows I’ve amused the people around me.

You might feel that this behavior is beneath my dignity as a librarian and as a senior, but at my age I choose to do what works for me. And if that means performing shoulder rolls as I check your books out or doing back flips while emptying the book drop, you’ll just have to go with it.

When my next birthday arrives, I’ll be that much more relaxed and fit.

And by the time I’m old enough to retire from library work? I‘ll be ready to run off and join the circus. 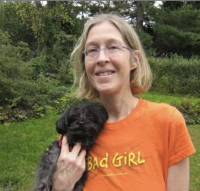 Roz Warren writes for the New York Times, the Huffington Post and many other publications. She recently appeared on the “Today Show.” You can read more of her work at www.rosalindwarren.com and connect with her on Facebook and Twitter @WriterRozWarren.

25 responses to “A Senior Decides to Try Stealth Stretches …”