Barbara Beskind’s favorite piece of advice for her older peers is, “Find out what you can do to make life better for others.”

She’s not the self-absorbed type. We had to press Beskind to admit that, yes, her arrival at the global design firm IDEO where she works can cause a stir. Sometimes, an email goes out announcing her presence in the Palo Alto office.

The other day, Beskind found a temp working at the receptionist’s desk. “He said, ‘I know who you are,'” she says. And so did his umpteen Facebook friends back home in Africa.

At 90, Beskind is by far the oldest member of a dynamic team working on what’s known as human-centered design for food, packaging, electronics and, most recently, aging. She is also one of the newest designers at IDEO. She started last July after applying to be part of the firm’s design challenge for products for older adults. That challenge is over, but Beskind’s stint is not. Every Thursday, she travels by train from her San Mateo retirement community to the IDEO offices.

“I’ve retired five times, but it’s like a vaccination that doesn’t take,” she says. Among her careers: 44 years in occupational therapy, 20 of those in the Army. She set up the first freestanding occupational therapy practice in the U.S., launched a lampshade replacement business and has written several books.

Beskind takes a long daily walk using a pair of ski poles she adapted for the job.

After one recent workday, she still had plenty of energy left to respond to questions from Senior Planet. 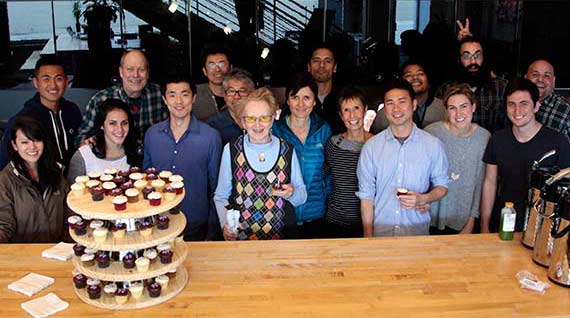 Barbara Beskind at her 90th birthday party at IDEO

As a 90-year-old non-designer, how did you manage to land a gig at one of the world’s best known design firms?

I was watching 60 Minutes in January, 2013, and there was an interview with [company founder] David Kelley of IDEO talking about the Design On Aging challenge. I wrote my resume, and rewrote it and rewrote it for about two months. A friend said, ‘You won’t hear for a month or six weeks.’ A week later, I got a call and they said, ‘Can you come for an interview?’

I got there, and there were 35 engineers and designers. I got up to speak and ended up talking for 20 minutes and took questions. They said, ‘What day would you like to come?”

I came on board and didn’t have time to enter an invention for the aging challenge myself, so they asked me to be one of the judges. Now I work with them on their projects. I’m sort of an ad hoc consultant.

Which of your projects so far are you most excited about?

I’m working on a revolutionary type of walker that is much more dynamic than the ones on the market today. My walker inspires the user to maintain a vertical position.

Of my own projects, probably I am most excited about a separate living quarters that would go behind an existing home, for elderly people to live in independently or to be in for end of life or hospice care. There are some on the market, but I have ideas that would be an improvement. I would have an entire panel behind the bed and a plug-in where there could be oxygen availability and blood pressure monitoring.

It would be prefab, the family could assemble it. It would have a chemical toilet, with water and electricity drawn from the house. The company that leases it would have to get all the permits. As soon as the person dies, the family would have to remove the structure.

How do you feel when you’re designing?

Where do you get your ideas?

All  I have to do is sit and watch people. I sit out in the hall of my retirement community and I see how many improvements are needed.

What is your take on today’s technology?

I don’t understand it, but I appreciate it. I have a Life Alert. I have a cell phone, but it’s very primitive – it has voice dial, which I need [due to low vision]. I have an enlarged screen on my computer, which I use for word processing. I’ve written a number of books on it.

You have to think outside of the box. Your have to be more than yourself. The world is more important than you are. Having a view of the world that is larger than you helps to maintain a productive, positive, expanded view. 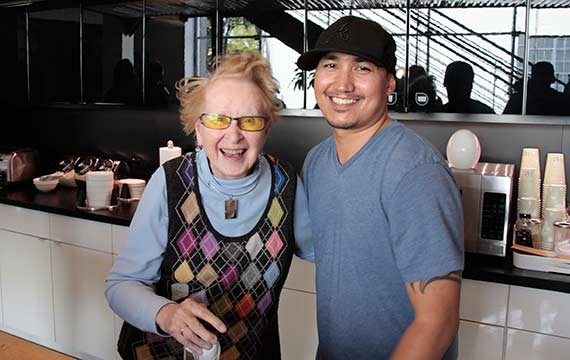